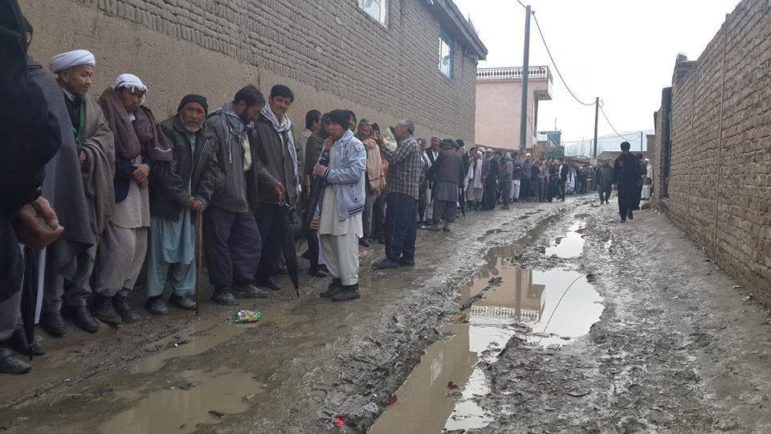 Voters lined up at a polling place on the outskirts of Kabul on Saturday. (YJI)

KABUL, Afghanistan – Although
the official results of Afghanistan’s national election won’t be announced for
another month, the victory is already clear.

The
people of Afghanistan are the winners of this election by defying violence,
terrorism and showing their enthusiasm for a democratic process.
This
election turned out to be an unprecedented major event due to the immense enthusiasm
displayed by all generations, but mainly the youth.

After
witnessing two months of rigorous campaigns across the country, on Saturday, Afghans
went to the polling stations to elect their future president from a field of
eight candidates.

It’s the first time I have participated in an
election and it was with my full spirit and enthusiasm that I cast my vote with
optimism for Afghanistan’s prosperity and for real democracy.


Throughout this election, I witnessed all my
friends engaging in election-related debates and conversations in a more civic
way, even though with disagreements.

For me, the most interesting events during the
campaign periods have been the live television debates among the candidates,
which provided a wonderful opportunity for us to evaluate them.
Polling day was a joyful day for me, seeing
Afghans with happy faces while casting their ballots.
Maybe the reason for all this enthusiasm is
that the youth make up most of the voters.
This
much-needed spirit for democracy comes in this important year when foreign
forces are withdrawing from Afghanistan and transferring all security
responsibility to Afghan forces.
This
is in fact a sign of progress and optimism for the future of Afghanistan where
estimated 7 million people cast their votes despite intimidating security
situations and harsh weather that included pouring rain in Kabul and
snow-blocked roadways in some mountainous districts.
It
shows the determination of the Afghan people to defend the values of democracy
and decide their own fate through voting. Though eight candidates
competed in the race, the top three frontrunners are Dr. Ashraf Ghani, Dr.
Abdullah Abdullah and Dr. Zalmay Rassoul.
Messages
of pride for being part of this election have circulated online and on various
television channels, and many people are calling to establish the 5th
of April as a new national festive day for democracy in the country.
Many
of those who voted uploaded pictures of their finger colored with the ink of
the polling stations.

People
also praised the Afghan security forces for their services and sacrifices day and
night to keep a secure atmosphere for the election. Though there were minor
incidents and some polling places were closed because of security threats, the election
went fairly smoothly.

The winner will replace the country’s
first democratically elected leader, President Hamid Karzai, who will be ending
his two consecutive terms in office. He was constitutionally barred from
running for a third time.
By transferring power
peacefully through this election, Karzai will make history as the first elected
president of Afghanistan to transfer power through polls and to respect the
decision of Afghan voters.
Despite differences of views
with some of his policies, people in general are praising Karzai’s tenure during
13 years of harsh situations and are showing gratitude by sharing his picture
online.
Afghans
on social media across the globe exhibited a significant amount of support for
this election, too, many expressing gratitude, pride and excitement at the
large turnout and toward police and security forces for the safe election.
Others
marveled at the historic election and stated hopes for freedom from terrorism
and extremism and a stable, peaceful and prosperous future.
Edrees Kakar is a Senior Correspondent for Youth Journalism International.