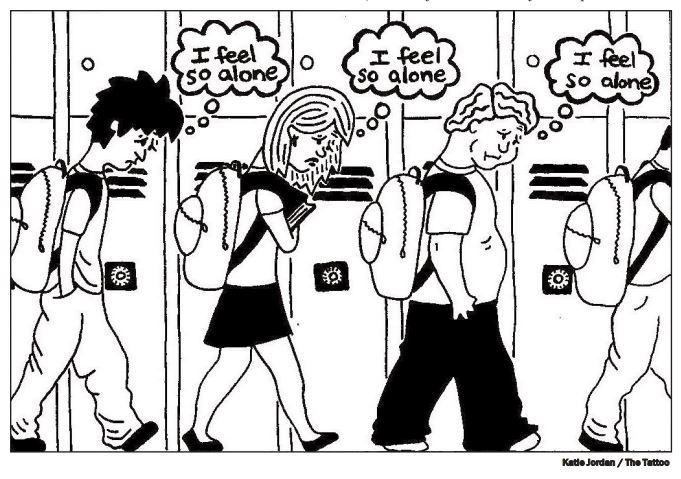 Your best friend is depressed and contemplating suicide.

This statement might not be true, but maybe it is. And maybe you have no idea.

Though it’s a problem that effects teens everywhere, depression often goes unnoticed, even by family and close friends.

That’s what it was like for Mary, a sophomore of Bristol Eastern High School, and Katy, a freshman at Windsor School . Both girls spoke on the condition that their identities be protected.

For a long time, Mary said, no one had any idea that she had a problem.

“I’m good at make-believe,” said Mary. She hid her depression, bottling up her sadness so no one would know.

Katy related a similar experience. Her depression remained unnoticed and untreated, she said, until she made a suicide attempt.

“I’m not really sure if it’s that I want to die,” Katy said. “I think it’s just that I don’t want to live the life I’m living.”

So Katy overdosed on medication at lunch hour one school day.

“I wasn’t planning on telling anyone, but I got scared and told my teacher,” said Katy.

Both girls said it was difficult to explain the exact reasons for their depression.

Katy’s father used to hit her, before he moved out several years ago. But though that was a huge part of her problem, she said she’s unsure if it was the only cause.

Mary said she has a good life, but has always been more mature than other children, and sometimes oversensitive.

Being different, as it often does, led to being picked on.

“When people teased me, my self-esteem shot down,” said Mary. “Then I started to beat them up.”

“It’s easier to get angry and deal with it than it is to deal with depression,” Mary added.

But her anger didn’t always lead her to hurting others.

There were times when her overwhelming emotions drove her to hurt herself: Mary had a problem with cutting, though she also hid this from those around her.

“It’s not something you’re really proud of,” said Mary. “I’m going to have scars on my body forever because of what I did.”

Once a friend noticed the cuts, Mary said, and Mary told her they were from her cat.

Katy has also struggled with cutting, or self-harming, and tried to conceal it from others. “I tried to hide it by wearing long sleeves,” she said.

But everyone found out what she’d been doing when she was brought to the hospital after her suicide attempt.

“It gave me another type of pain to focus on other than the pain inside,” she explained. “I would bleed out my pain because I didn’t know how to talk about it.”

Though she said she found it difficult to explain to other people, Mary’s reason for cutting herself was similar.

Mary also said she found release in fits of uncontrollable crying — but only when she was alone.

Being alone was part of Mary’s problem. During her worst periods of depression, she had no friends, she said.

Katy also said she was isolated, because friends either ignored her or said unkind things to her after she tried to kill herself and went to the hospital.

“I don’t think they wanted to be friends with me anymore,” Katy said.

The loneliness became even worse when the school system removed her from school, after a second suicide attempt and hospital stay.

“Every day I sit at home I’m getting more depressed,” said Katy.

Without friends to turn to, unfortunately neither of the depressed teens found family a complete source of comfort, either.

Katy said her family didn’t really understand her depression and was “really critical about things.”

Mary suffered a traumatic loss when her grandfather died a few years ago.

Her parents knew that he was ill, but left Mary at home when they went to see him — she never got to say goodbye.

The loss of a loved one is painful for anybody, but Mary said her grandfather’s death was especially hard.

Besides the cutting, the crying, and the fighting, Mary also began to neglect her schoolwork.

“It’s hard to do anything when you don’t see a point,” she said.

People finally started noticing Mary’s problem when her grades dropped. Her mother eventually decided that she should see someone about her depression.

Mary said that talking to a professional helped to organize her thinking, even though she didn’t feel an emotional attachment to the person.

“They’re just somebody to talk to,” she said.

Katy has tried many ways of treating her depression since her suicide attempts brought attention from the school and her family.

A succession of antidepressant medications — Paxil, Zoloft, and Effexor — hasn’t helped her much, Katy said.

Katy found, like Mary, that communicating with others is helpful.

Before she was removed from school, she said, the social worker and the teachers were very supportive, though other students isolated or mistreated her.

“When I was in the hospital, the other patients were really nice and understanding, and so were the doctors and nurses,” she said.

Katy also took part in a course called Dialectical Behavior Therapy, which involved talking with a psychiatrist and learning to deal with emotions.

“I would really suggest the program DBT,” Katy said.

Besides this program, Katy had other suggestions for teens dealing with depression.

She said they should not give up, because “there are always people out there who are going through similar situations.”

Mary said she now has friends who try to be there for her, even if she can’t make them understand what she’s going through.

Mary’s advice for anyone suffering from depression: “Find somebody to talk to.”

“It eats you alive from the inside.”