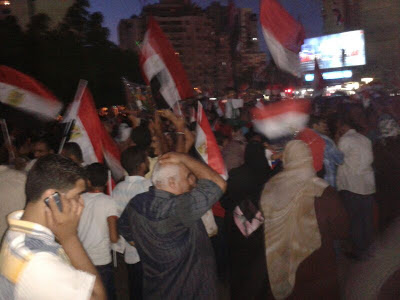 ALEXANDRIA, Egypt — After four days of continuous effort and determination, all our demands are finally met.

In the crowds gathered in the Sidi Gaber neighborhood in Alexandria, we heard the military had issued a travel ban on President Mohamed Morsi and some of the Muslim Brotherhood. It also barred him from making political decisions.
We’d been waiting for hours for the military’s speech before learning that Morsi is no longer our president.
Egypt is finally free from a president who wasn’t good enough to lead it and who never listened to the citizens or protected their rights.
Early presidential elections and a new constitution were promised. 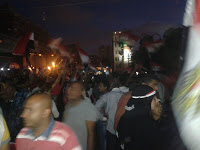 Nothing can describe the happiness the Egyptian citizens are feeling right now.
Throughout all Egyptian cities, people are dancing, singing and cheering.
Fireworks are lighting up the sky.
We couldn’t feel more honored because we were capable of achieving what we’ve been fighting for all this time.
Now we’re free from the people who were bad representatives for our country and our religion. Egypt will finally go back to the way it always was: a land of safety, freedom and united citizens no matter their religious faith.
We all love this country more than anything, so we will always protect it and fight for it. The 25th of January Revolution and this new revolt proved to everyone that no one can stand in front of the great Egyptian citizens who will never give up on their country.
Egyptians will always work to make their nation rise.
And all those honorable people who died trying to make a difference and standing for what they believe in will always be in our hearts.

Dina El Halawany is a Reporter for Youth Journalism International. Photos are also by El Halawany, taken in Alexandria today.