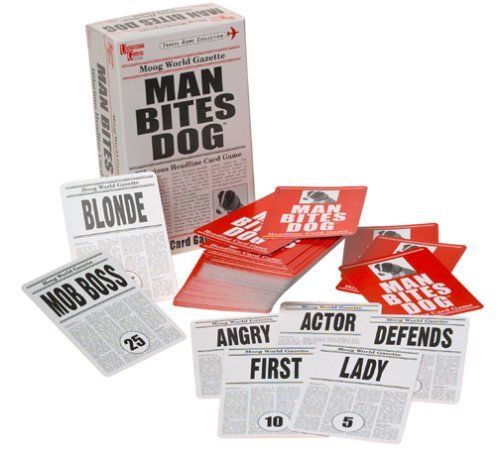 PRIOR LAKE, Minnesota, U.S.A. — As if being a journalist isn’t enough, playing games like Man Bites Dog makes you realize that the job is starting to take over your life, if it already hasn’t.
If you haven’t already noticed by the title, Man Bites Dog is not a conventional card game. It is neither as cut throat as Egyptian Rat Screw nor is it as deceptive as poker.
It has its own set of special cards and each card has a word that will be a part of the headline. The whole point of the game is to make an interesting headline, to say the least.
Each player gets five cards and tries to come up with the best newspaper headline imaginable. Words such as “lawyer” and “tourist” get zero points while “beauty,” “thug,” and “judge” get 25 points each.
For unusual words like “urologist” and “naked,” you get 50 big points.
If the word selections really don’t give you much to work with, you can try your luck and trade in up to three cards for new ones. You can increase your chance of dominating the round if you’re lucky enough to get an “Exclusive” card, which doubles the points that you get for that headline.
Headline ingenuities will tickle your funny bone as you play. This game is especially fun for news junkies, but anyone who can string words together can have a good time pretending to be a tabloid editor by playing Man Bites Dog.
Man Bites Dog is recommended for people who are eight and above. It’s part of the Travel Game Collection of University Games.