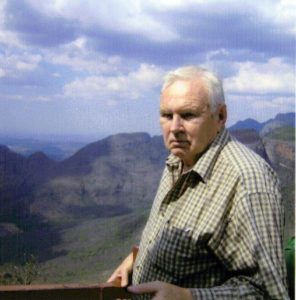 A world traveler, Dick Inglis has visited 114 countries and all the states in the United States at least twice. He’s recently returned from a journey to Venezuela, Trinidad, Guyana, and Surinam.
Dick, who was born in South Dakota, attended South Dakota State University and worked in a number of jobs there. He worked at the John Morell packing house and was a miner at Homestate Gold Mine in South Dakota and Magma Copper Mine in Arizona.
He worked for Dun & Bradstreet from 1958 to 1983, managing offices or departments in Albuquerque, New Mexico; Oklahoma City, Memphis, Kansas City, Chicago, New York and for the last eight years, in London.
In 1983, he went to work for Justicia International as managing director in its London office, overseeing the company’s European operations. He resigned in 1985 and returned to America, where he set up the U.S. office of Justicia International, which he continues to own and operate.
A voracious newspaper reader, Dick is keenly interested in events local, national and worldwide. He firmly believes in quality education and opportunities for children as a way toward a better world for all. His background also includes writing and speaking in the financial and information fields.
Dick has been married to Darleen Inglis for 52 years and has two daughters, one in Hong Kong, the other in England. He has lived in Bristol, Conn., for 26 years and has been active in
the New England Carousel Museum and the Central Connecticut Chambers of Commerce. He has an avid interest in politics and race cars.