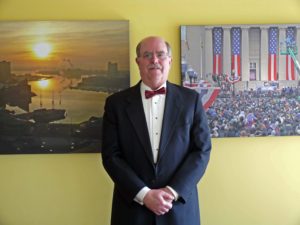 At Purdue University he was a reporter and photographer and became photo editor at the daily Exponent until the Board of Trustees closed it because of a story the newspaper was pursuing on real estate dealings by the Purdue Research Foundation.

He became a stringer for the Lafayette Journal & Courier, which then hired him as a regional reporter and photographer. He later was a police beat reporter and city reporter before being promoted to assistant city editor and city editor.

His first editor’s job was at the Sturgis Journal inMichigan. He later served as editor in Chambersburg, Pa., Bristol,Conn., Easton,Pa., and Bridgeport, Conn. In 2006 he helped launch the Baltimore Examiner, a free-distribution six-day newspaper that in less than two years rose to more than 400,000 daily and 640,000 Sunday print readers, and a Web site with more than 300,000 unique visitors and 1.1 million page views a month.

Web readership surged when the Examiner published full police department payroll data and called for overtime cost control in an editorial. That resulted in threats from the mayor, police commissioner, police union and city solicitor, as well as numerous anonymous threats promising violence and death. The paper’s owner removed payroll data after Baltimore Police arrested Keegan in his home less than a week after publication. The state dropped all charges a month later. The Examiner closed in 2009.

Among his many state and national journalism awards, he is proud to have been fired three times, arrested three times, to have prevailed in overturning illegal arrest of one of his photographers, and to have won numerous freedom of information and libel fights.

Now he is looking for new sustainable models to help citizens watchdog government.