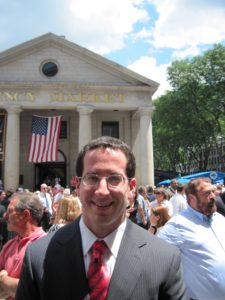 Collin Seguin joined Youth Journalism International as a sophomore at Bristol Central High School, writing sports stories for The Tattoo.  His work for YJI helped him earn a scholarship as Connecticut’s top high school sportswriter in 1999.  He has used the writing and research skills he learned from YJI throughout his academic and professional career.
Following high school, Collin attended Boston University, where he graduated in 2003 with a BS in Print Journalism and a BA in History.  While at Boston U., Collin wrote for The Daily Free Press, the student-run independent newspaper on campus, and was inducted into the Order of Omega Honor Society.  He also received a scholarship through the Kappa Sigma Scholarship-Leadership Awards Program.
Following a stint in media relations, Collin attended the University of Connecticut School of Law, where he earned his J.D. in 2010.  At UConn Law, Collin was a Lead Articles Editor on the Connecticut Insurance Law Journal, and was chosen for membership on the Connecticut Moot Court Board.
Currently, Collin is employed as Associate Counsel at Travelers Insurance.  Working in the Travelers Staff Counsel office in Hartford, CT, Collin defends individual and corporate Travelers insureds in lawsuits involving product liability, premises liability, and motor vehicle liability.  He is also a member of the office’s subrogation practice group.  He is admitted to practice in Connecticut, Massachusetts, and the U.S. District Court for the District of Connecticut.
Collin lives in Connecticut with his wife Sheli and their two dogs, Maggie and Daisy.