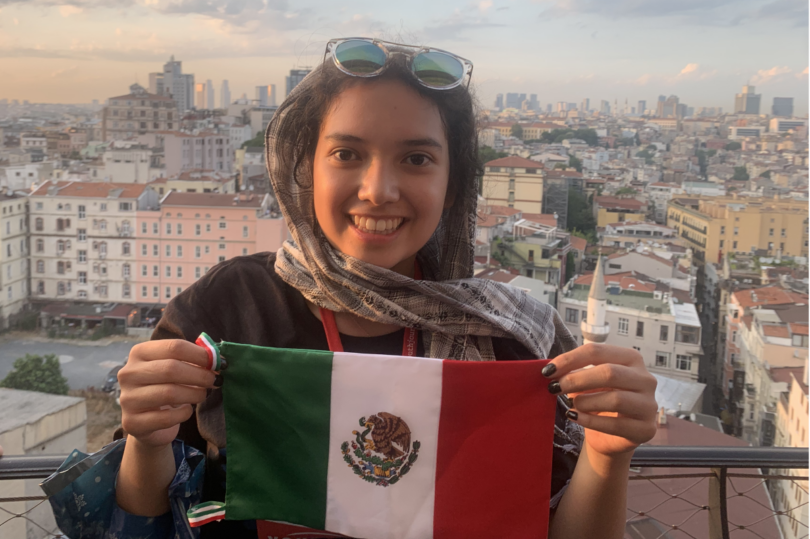 Regina López proudly holds her Mexican flag as she stands at the top of Galata Tower, the city of Istanbul at her feet. (Owen Ferguson/YJI)

ISTANBUL – My uncle is a pilot who has been to every continent and currently lives in Qatar. His life is full of travel. He’s seen so much, but what he always finds fascinating is that in almost every country, he’s found a fellow Mexican.

So before I took off to Istanbul for the Youth Journalism International Global Conference, my checklist of things to do in Türkiye included finding a Mexican there, or at least a trace that referenced Mexico.

On the third day, I and the rest of the YJI reporters visited the Grand Bazaar, a big, fancy, covered market. Colors were shining from every store entrance. They were selling scarfs, carpets, jewelry, lamps, Turkish delight. It was tourist heaven.

After many hours of walking the hilly streets of Istanbul, the YJI crew finally arrived at the Grand Bazaar. Honestly, we did look very much like tourists. We were wearing our YJI t-shirts, we had our caps on and our cameras out and our group consisted of almost 20 very different looking people.

Naturally, every seller came rushing out of their store to give us free samples.

We ended up in a Turkish delight store where a man was literally feeding us Turkish delights into our mouths. None of us objected, and we stopped to talk to the people in the store.

They were checking our press passes and they noticed I was from Mexico and for some reason they found this very captivating. They started blurring every word they knew in Spanish like ‘5 de mayo,’ ‘día de muertos,’ ‘¡Viva México cabrones!’ – the classics.

Then I heard a very neatly constructed question.

“¿De qué parte de México eres?” “‘Which part of Mexico are you from?”

As I was trying to identify which man was asking, I answered in Spanish, “I’m from Mexico City. Where are you from?”

A tall, skinny man approached and started a conversation with me in Spanish.

He wasn’t Mexican, but like every random guy you find in the Grand Bazaar in Istanbul, he had a story.

He was a Syrian immigrant who had actually learned Spanish by listening to the tourists who came to his shop. After some years working in the Bazaar, he flew to America to live in Mexico for some years. Now he lives happily in Türkiye, still selling Turkish delights in the Grand Bazaar.

My friends told me that I had this vibe that screamed Mexico and I started to notice some little things I automatically do. For instance, the way I rode the subway or the way I move when I’m in a crowd.

In the Grand Bazaar, I felt like I was just in a very fancy tianguis, a market in Mexico City. I felt that I was in my zone. I even haggled my way into buying four bracelets for less than a dollar.

One of my friends from Türkiye was afraid that I was getting scammed.

After she realized what happened, she made my heart so happy when she said, “Of course you’re from Mexico City.”

It took a while until I completed my mission. It was our last day in Istanbul and I had already accepted my failure.

We were taking pictures outside the Blue Mosque. A trio of very lively 20-somethings approached us and asked us the same questions, where did we come from, what we were doing in Türkiye, how old we were. These kinds of encounters became a routine for us so very casually I mentioned that I was from Mexico.

The girl’s face in the trio lit up and two seconds later my face also lit up. She also comes from Mexico City. She said she was tired of her job so she packed up her things, called her friends and decided to fly across the world. They had been in Turkey for almost two weeks by then.

My home was always with me.

My life in Mexico unconsciously taught me skills that helped me go on my own to the other side of the world. I feel the reason I hung on so tightly to that weird quest was so my home wouldn’t leave my mind.

Regina López is a Correspondent with Youth Journalism International.