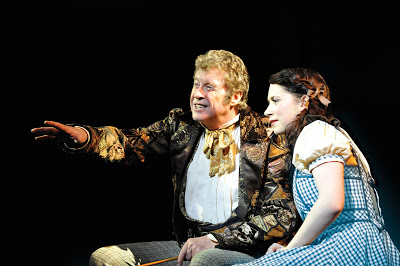 By
Emily Couch
Junior
Reporter
Youth Journalism International
LONDON,
England – I followed the Yellow Brick Road to London’s world famous Palladium to
see the original American fairy tale – The
Wizard of Oz.
The
story begins on a farm in Kansas where the heroine, Dorothy Gale, dreams of
something more.  A powerful cyclone
grants her wish by dropping her into the magical Land of Oz.
Having
been hailed as a hero for having killed the Wicked Witch of the East, Dorothy and
her unusual set of friends must travel to the Emerald City to find the Wizard
and save the day.

In
1939, the famous film version starred Judy Garland, who performed at the
Palladium herself.
The
search for England’s Dorothy began just over a year ago on the BBC reality TV
show “Over the Rainbow,” which held auditions all over the UK, whittling down
9,000 hopefuls to a final 10 who competed to win the country’s favour.
The
panel of judges included:  John
Partridge, who was part of the filmed version of Cats, Charlotte Church a Welsh soprano, and the famous British
actress, Sheila Hancock.
The
judges, who were of course presided over by the man behind it all, Lord Andrew
Lloyd Webber, chose 19-year-old Danielle Hope as the people’s Dorothy.
A
momentous task lay ahead of her in playing Judy Garland’s iconic role.  Could she fill the Hollywood star’s ruby
slippers?

As
it happened, she stepped right into them and they fit her just as well as the
glass slipper fit Cinderella.
Hope
was careful to remain faithful to Garland’s portrayal whilst also bringing her
own slightly edgier quality to the role.

This
brought Dorothy forward into the 21st century so many younger
members of the audience could relate to the “nobody understands me”
sentiment.
Hope
proved to be a real triple threat.  Her beautiful
singing, subtle yet characterful acting and her fancy footwork on the yellow
brick road were all flawless.
Theater
legend Michael Crawford, whose credits include the title role in the iconic Phantom of the Opera, played The Wizard,
Professor Marvel, the Doorkeeper and the Tour Guide.
The
ease by which he moved between four different roles with four different accents
is testament to the sheer quality of his acting.
Although
no longer in its prime, his powerful voice remained firmly intact, bringing
down the house at the end of Act 1.
Emily
Tierney played a wonderfully bubbly Glinda and gets to show off her amazing
soprano throughout. She also brought some of Glinda’s comic value from her
portrayal of the Glinda in Wicked,
adding a new touch to the original role.
Hannah
Waddingham was a truly Wicked Witch in both senses of the word. Perfectly
portraying the epitome of evil, Waddigham was definitely a match for Dorothy,
and wowing the audience with her show-stopping performance of “Red Shoes
Blues.”
The
little West Highland Terrier who played Toto was, of course, a big hit with the
crowd, gaining many a well-deserved “awww” for the cute factor and for his
seamless performance.
The
Scarecrow (Paul Keeting), Tin Man (Edward Baker-Duly) and Cowardly Lion (David
Ganly) were all brilliantly played, bringing in the timeless humor of their
characters.
The
set had the typical magic of a West End show. The Palladium’s rotating stage
was put to good use as the Yellow Brick Road, the Witch’s castle and many other
scenes.  Designers used the trick of
perspective to create a seemingly soaring palace for the Wizard.
The
aptly-used projections designed by John Driscoll added a new, techy edge to the
show, taking us from Kansas to outer space.

The
creative team also had a particular proclivity for pyrotechnics, which were
used regularly throughout the show.
The
costumes were all nearly identical to those of the 1939 movie with the
exceptions of Glinda and the Wicked Witch. Instead of the large, pink, wedding
cake-esque dress of the movie, Glinda gets to wear a magical, glittering blue
dress with a hairdo reminiscent of a squirt of blue whipped cream.
The
Wicked Witch got to shed the shapeless costume of the movie for a sleeker, more
feminine, black corseted dress to compliment her green body.
The
show included all of Harold Arlen’s original award-winning music plus seven new
songs by Webber, including Professor Marvel’s “Wonders of the World,” Dorothy’s
“Nobody Understands me,” the Witch’s “Red Shoes Blues” and the chorus number,
“Already Home.”
The
show definitely had echoes of Webber’s other shows. The exciting new technology
and projections seemed to be influenced by those used in the Phantom sequel, Love Never Dies.
The
Wizard’s song, “Bring Me the Broomstick” was a potent reminder of Phantom of the Opera, especially with
Crawford’s voice booming around the theater.
All
in all, the Wizard of Oz is an
immensely enjoyable show for all the family, providing a much-needed magical
transportation from everyday life.
You’re
left thinking, “Toto, I don’t think we’re in London anymore!”
The
production is certainly a worthy resurrection of the classic film loved by
generations.
If
you happen to be in London, I strongly suggest you hop, skip, jump or hail a
taxi down the yellow brick road to the London Palladium to see the truly
wonderful Wizard of Oz.