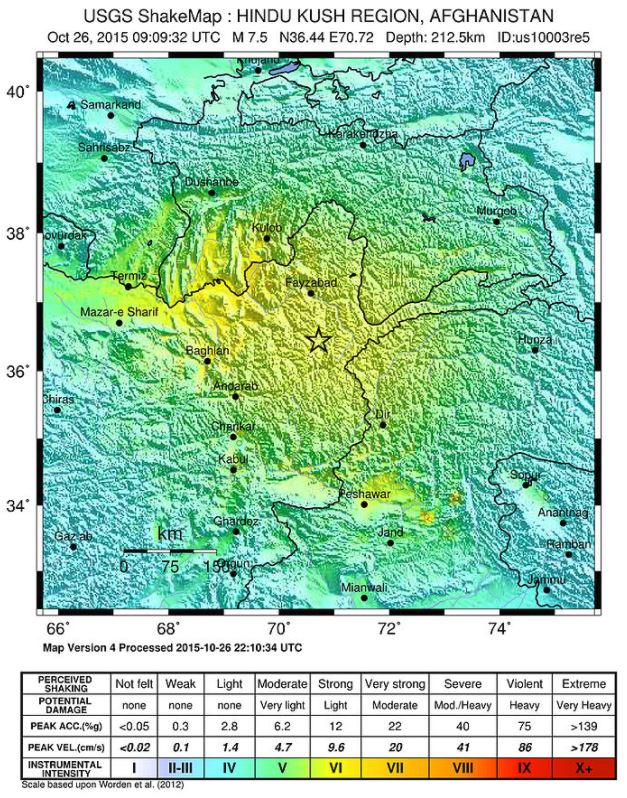 U.S. Geological Survey map of the Oct. 26, 2015 earthquake felt in Lahore.
LAHORE, Pakistan – The crisp autumn air, running over to classes, grabbing a sandwich from the cafeteria, students whining about midterm exams – Monday was a normal day at my
university – until the earthquake.
After taking my last class, I was enjoying the company of some friends, sitting on the second floor of a building that overlooked an indoor fountain. As the friendly squabbles went on, suddenly I felt the floor vibrate intensely and when it didn’t stop, I looked around.
No one seemed to have noticed anything at all except the friend sitting next to me who nodded in acceptance: it was an earthquake.
It didn’t seem like it was high magnitude and for a few seconds, it paused. Then, there was a huge shock. It felt like the whole building was moving right to left in front of my eyes.
Chills ran down my spine as everyone moved to the exit. I looked for a safe place, a door, desk or chair, but some professors asked us to go for the open ground.
We descended the stairs and came outside to a small crowd of confused and terrified students. Some of them, who had been having a midterm exam, held their answer sheets in
their hands.
Some students looked seriously freaked out and were praying for God’s mercy, while others didn’t let go of their humor, even in this sinister situation.
We waited around for a short time and I got a call from home to make sure I was all right. I couldn’t reply to the many texts I received asking about safety or send any others because the mobile networks seemed jammed.
This earthquake brought back memories of the one in 2005, when, on October 8, Pakistan suffered one of its biggest natural disasters.
I was reminded of the thousands of people who lost their lives and the millions injured because of the ferocity of nature. For months after, every citizen in the less affected areas worked to save those in more affected areas.
Donations, food, blankets, toys and other items were collected and camps were set up all over the country to help and provide residence to the displaced people.
My heart wondered if this earthquake had been as catastrophic as that one. Only later did I come to know that it was even worse. More than one country is impacted by this earthquake, which means people should unify, put their differences behind them and work together to repair the damage.
In some sense it feels like Mother Nature is taking revenge upon humanity for damaging so much of her natural resources and beauty. Let’s hope for mercy now, and not more casualties.
Arooj Khalid is a Senior Reporter for Youth Journalism International.
***
Your tax-deductible contribution can help support this nonprofit at:
www.HelpYJI.org