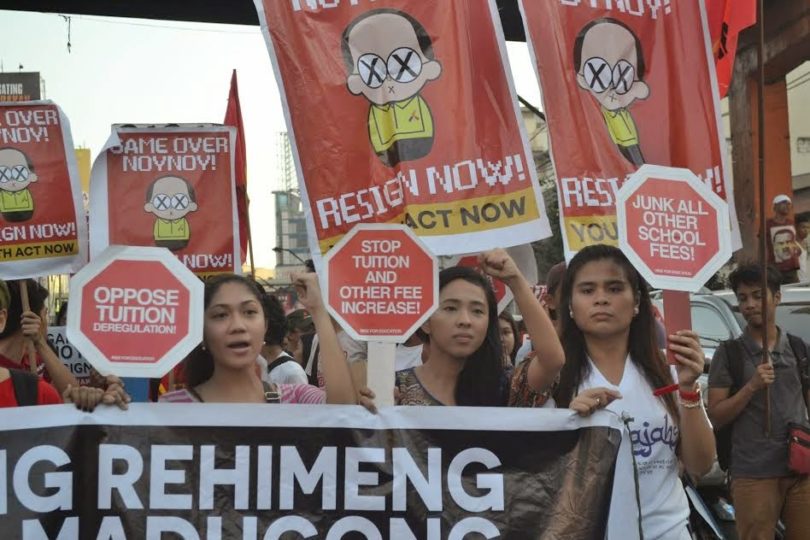 Women leaders of youth organizations joined the demonstration on International Women's Day in Manila. Youth groups demanded an end to increases in tuition and other school fees as well as tuition deregulation. (Twinkle Imperial/YJI)

Gabriela and other nationalist people’s organizations marched to Mendiola in Manila, near Malacañang Palace, the president’s official residence, to call for Aquino’s resignation over the Mamasapano bloodbath in Maguidanao province, government corruption, blatant disregard for the legitimate calls of the Filipino people and neglecting the needs of typhoon Haiyan victims.

Aquino is “the worst disaster that hit women and their families,” Gabriela said in a statement, listing issues a range of economic and political issues – joblessness, skyrocketing prices of food, utilities and other services as well as the mounting call for truth, accountability and justice – as reason for their demand.

“As we represent half of the population and we are present in all sectors, we have to make sure that our government is being run with our interests in mind. And after almost five years of the Aquino regime, we can no longer stand his disastrous governance,” Gabriela Secretary General Joms Salvador said. 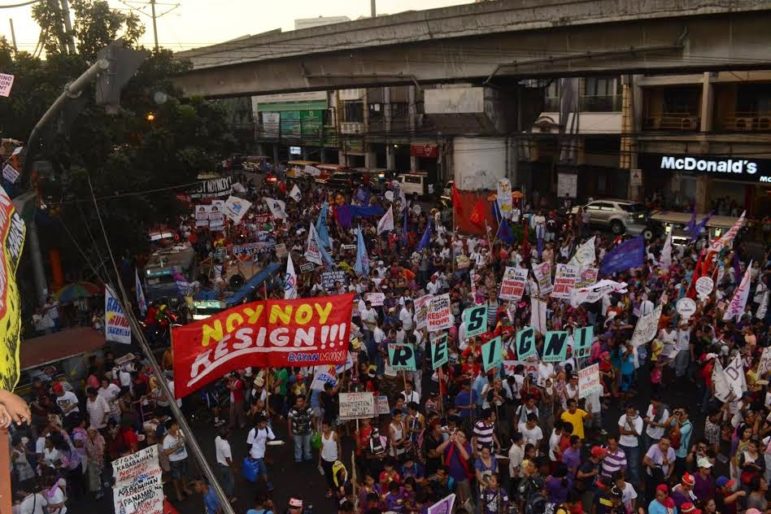 Gabriela also launched #PinaysWantNow on Twitter and other social networking sites to encourage women and women’s rights advocates to share their thoughts on the issues.
International Women’s Day marked 44 days since the attack in the province of Maguindanao in southern Philippines that claimed the lives of almost 70 people, including members of the Philippine National Police Special Action Force, Moro Islamic Liberation Front, Bangsamoro Islamic Freedom Fighters and civilians.
Widows and families of the fallen held a solidarity action morning of March 8 in front of police headquarters in Quezon City and called for accountability from the Aquino administration.
For Gabriela, justice is possible when women are enlightened with the issues and aware of their democratic rights.
The organization also called women around the world to be part of the people’s struggle for genuine freedom and democracy.
Other actions were held in key cities around the country.
Marc Lino J. Abila is a Junior Reporter from the Philippines for Youth Journalism International. Twinkle Imperial is a Photographer for Youth Journalism International.
***
Your tax-deductible contribution can help support Marc Lino J. Abila
and other students at this nonprofit at
www.HelpYJI.org