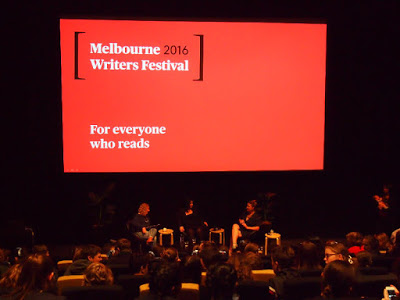 Writers Clementine Ford and Amy Gray talked about opinion writing with a moderator at the Melbourne Writers Festival. (Jack Ward/YJI)
MELBOURNE, Australia – Some of the world’s top authors gave tips and shared life experiences at the Melbourne Writers Festival, held recently in Federation Square in Melbourne.
John Marsden, the author of the Tomorrow series and Meg Rosoff, the author of How I Live Now spoke about how their books – both published in 2006 – had been adapted into movies.

Marsden said he wrote Tomorrow, When the War Began in eight months. It sold more than five million copies worldwide and won every major writers award for young fiction.
Marsden had more than 65 offers to turn his book into a film, but said, “Hollywood shouldn’t be able to buy everything.”

It was, however, such a good opportunity that he didn’t turn it down. Now the film, which came out in 2010, is in the past and ABC’s TV
series of the book is the newest edition to the story.
“We are all writers and musicians; we can do anything we put our minds to,” Marsden said, advising young writers, “Learn by reading other writers work.” 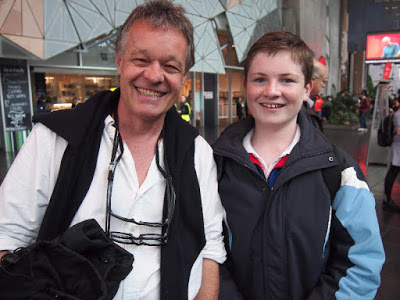 Graeme Base, author of picture books such as Animalia stopped to chat outside the pop up bookshop at the Melbourne Writers Festival with Youth Journalism International Reporter Jack Ward. (YJI)

Rosoff’s journey to the big screen started when she wrote a screenplay for How I Live Now for a filmmaker and received great feedback. But an unrelated tragedy befell the filmmaker and derailed the project.  It was 2013 before director Kevin Macdonald brought the film to the theater.

All forms of writing aren’t the same, according to Rosoff.
“Just because you can write one type of writing doesn’t mean you can write all types,” she said.
Her latest book, published this year, is a novel called Jonathon Unleashed and involves some doggy situations.
Suzy Zail, author of fiction and non-fiction books based on the Holocaust, told the audience at the writers conference about how
her writing adventure began.
She quit her job as a solicitor, she said, to spend more time with her father, who had been diagnosed with motor neurone disease.  Doctors said he might have just six months to live.
She had one last conversation to have with her father, Zail said, and flew to his house. He had an interesting story to tell.
After 10 days of talking, he had told her everything about his childhood Holocaust experience – something they’d never before discussed. 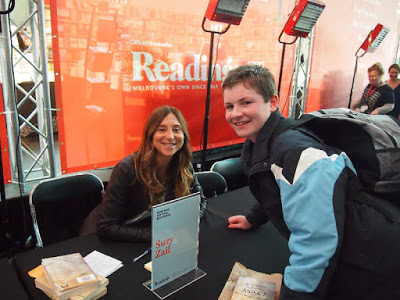 Zail then decided to share his story of survival and that’s when her writing career began with the book The Tattooed Flower: a Memoir.
That, however, wasn’t enough. She then wrote The Wrong Boy, which was her first fiction book. She said she wrote the book as a way of keeping her dad close – its main character is based on his stories.
Zail ended by saying how important research is and to make sure the story you are telling is true because that’s what the reader expects.
Two opinion writers, Clementine Ford and Amy Gray explained how their writing careers began and how hard it is to crack into the industry.
Gray said she started by blogging for years, while Ford, who was the editor at her university newspaper, began by giving herself a
column. These first opportunities were great learning experiences for both of them.
Since then both women have written articles for many big name companies. Ford’s latest is her new book, Fight like a Girl. Both writers said that when it comes to opinion writing, people like personal stories and sometimes it is good to be hot headed, other times not.
Gray and Ford offered a few key point for aspiring writers to remember. The work is not about perfection, they said, but could be viewed as an exercise.
A writer should consider what he or she is trying to say, and make sure the reader can understand the point.  Most of the work – about 60 percent – is about the story, they said, while the writing itself takes up the rest.
Jack Ward is a Reporter for Youth Journalism International. 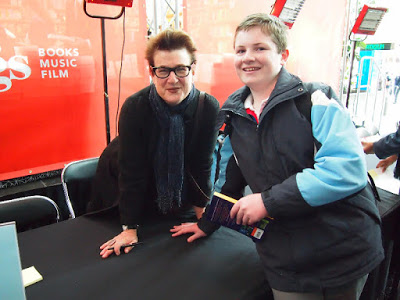 ***
You can make a difference to young writers
with your tax-deductible gift to Youth Journalism International.
Thank you for your generosity.
HelpYJI.org 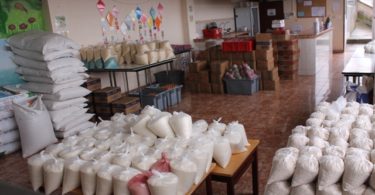 QUITO – There are some places where not everyone is lucky enough to be worried about boredom... 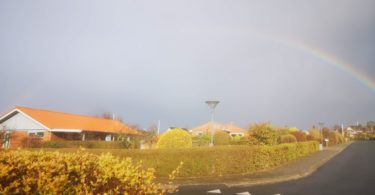 Ebeltoft, DENMARK – Having been earlier than most to introduce measures to tackle the current...