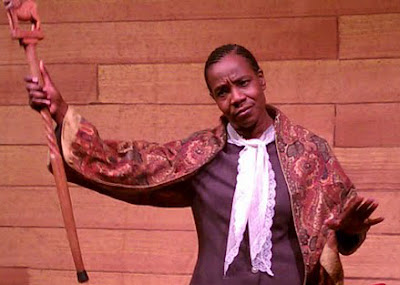 Camilla Ross portrays Harriet Tubman in a performance at the Mark Twain House and Museum in Hartford. (Mary Majerus-Collins/YJI)

HARTFORD, Conn., U.S.A. – In a recent performance at the Mark Twain House, actor Camilla Ross used the perfect combination of humor and tragedy to tell the story of Harriet Tubman and the Underground Railroad. Ross really captured the audience with her one-woman show by the Emerson Theater Collaborative and told Tubman’s story well.

Several times during her performance of “Harriett Tubman’s Dream,” she broke into traditional slavery-era songs and also told funny stories.

At times, when she was talking about tragic events from Tubman’s life, Ross almost started crying. When talking about Tubman getting beaten by one of her masters or separated from her family, Ross had every reason to bare her emotions.

I learned a lot about Tubman from this presentation, which was written by Lisa Giordano and directed by Aaron Arbiter, both about her background and her efforts in helping slaves to freedom.

Viewers were educated on Tubman’s family history and the events that led her to help free hundreds of slaves.

The show taught the audience how religious Tubman was and what she and other slaves thought about slavery and politics at the time.