Bristol, Connecticut, UNITED STATES — It’s all about a kiss.

Bristol Eastern High School thespians will put on their production of Bye Bye Birdie starting on May 11 in the school auditorium.

The original play, which first appeared on Broadway in 1960 and was later made into a film, takes place in 1960.

In the story, the character Conrad Birdie, who is considered a parody of Elvis Presley, is about to be sent off to war. His agent comes up with a last-minute publicity stunt that involves a random drawing so that one last person can kiss Conrad before he leaves. 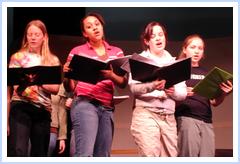 The lucky girl is Kim MacAffe, a 15-year-old who lives in Sweet Apple, Ohio.

The play revolves around the conflicts that the kiss arouses, especially problems with Kim’s parents and boyfriend, while giving the audience a glimpse of what it was like during the 1950s and early 1960s – a time of poodle skirts, hula-hoops, and Elvis.

“It’s a time that everyone can relate to,” said director Lisa Carroll, who teaches drama and English at the school. “Even though (the students) haven’t lived through the ‘50s, we all know what it was like because of different shows… and movies.”

Carroll said the story is easy to relate to because the main characters are high school students, and so are the actors.

With the undertones of teenage relationships and trouble with parents – not to mention the lighthearted musical numbers – it’s obvious that the students would have a good time bringing their translation to the stage.

The kids seem to agree.

“It’s a good change,” said Michaela Sullivan, who plays Kim’s mother Mrs. MacAffe. “This play is what you imagine the ‘50s to be like – it’s cliché ‘50s.” 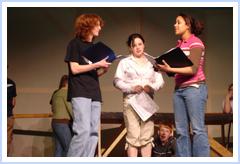 Most of the students have been in other drama performances, including last fall’s production of The Crucible.

“Drama is one activity where you’re not really competing against anyone, besides auditions,” said Carroll. “High school is especially a good time to be involved in this sort of thing because it’s a time where some kids are not yet completely comfortable with themselves. So they can perform onstage with the safety of becoming someone else, while having a good time.”

Most of the students seem to have the opinion that acting is a good outlet because an actor gets to be someone else.

“It doesn’t matter what (problems are) going on in your life,” said Sullivan, “because you can get up onstage and forget (them), if only for five minutes.”

Another reason that the kids seem to like doing the plays is because of the satisfaction of successfully designing a show from start to finish – it takes months of work on costumes, set design, lighting and other technical details.

Students rehearse almost daily, working on the expressions, movements, lines, and songs of each individual character.

“After all the hard work, it’s great to see the final product,” said Rob Saporito. “When you’re all done, and you hear everyone clapping, you know that they’re clapping because of what you did. It’s really a great feeling.”

Bye Bye Birdie is playing in the Bristol Eastern High School Auditorium at 632 King Street, Bristol, Connecticut. The shows are at 7 p.m. on May 11, 12, and 13. Tickets are $8 for adults and $5 for students and seniors and are available at the door.