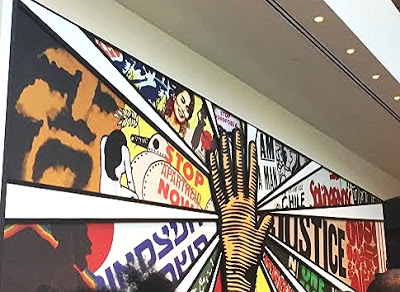 At the Center for Civil and Human Rights in Atlanta, a large mural unites many civil and human rights struggles worldwide. (Madeleine Deisen/YJI)
ATLANTA, Georgia, U.S.A. – Hip hop entertainers recently joined academics to talk about the relationship between the music and social justice, stressing the need for connections between people.

In his opening remarks, Derreck Kayongo, chief executive officer of the Center for Civil and Human Rights, said, “As human beings, we are equal. And important to each other.”
Rice said people need to look at how they’re connected.
“This polarity is forced on us. We have to push this at arm’s distance,” Rice said. “This is what’s so revolutionary and gangsta about Martin Luther King, Jr., is it’s all about love.”
Blackman tied that into hip hop.
“That polarity has slowed down hip hop’s unifying, cohesive force,” she said. “That separation and that divisiveness, and the stories we begin to tell ourselves, chip away at what hip
hop could be and its true power.” 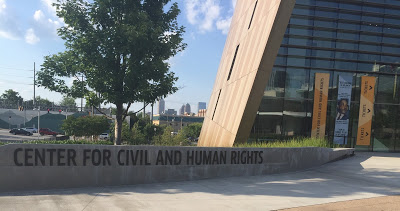 The Center for Civil and Human Rights in Atlanta, Georgia (Madeleine Deisen/YJI) 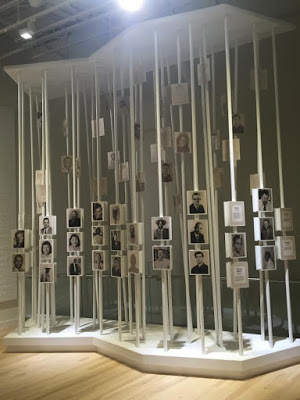 A collection of photographs memorializes some of the people who lost their lives during the American Civil Rights Movement of the 1950s and 1960s. (Madeleine Deisen/YJI)

Panelists talked of hip hop’s “power,” as Blackman said, as a tool for both personal and political change.

Malhora asked the panelists why they “do what they do.”
“I started writing poetry to deal with my pain and my frustration, but also to express my political beliefs,” Blackman responded. “’This microphone is my liberation.”
Stic, who is also a healthy living advocate, touched on the balance between the political and the personal in hip hop.
“You get put in these boxes. All these political agendas are supposed to come through you,” Stic said. “But it’s also self-work, spiritual questions, the whole being.”
Rice expressed his fear that “we’ve misappropriated the artistic soul of the people.”
“Hip hop is so easily commodified,” Rice continued. “I mean, you want people to be able to eat, to support themselves, but not to the detriment of this soul.”
Malhora asked the panelists about criticisms of hip hop’s misogyny.
Killer Mike was adamant that the hip hop community has “progressed way further than the world on women’s equality.”
He cited all the strong, respected women who have been a part of his life, and explained that he was always taught from childhood to respect women.
“When we talk about the male/female problem in hip hop, we have to talk about the male/female problem in our world,” said Blackman.
The panel did not only talk about hip hop, but also about how to change public policy.
The low voter turnout in local elections poses a problem to changing policy, Malhora said, because “policy is not going to be changed by the President of the United States.”
Killer Mike emphasized the importance of the people in government. 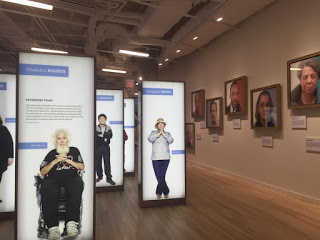 An exhibit on the third floor of the Center for Civil and Human Rights in Atlanta expands the discussion of human rights around the world. (Madeleine Deisen/YJI)

“You don’t change policy without people,” said Killer Mike, who has been active in the Bernie Sanders campaign. “Policy never saves us, the people save us.”
Stic said, “We are the people. We are the government.”
Rice made it clear that people need to work for policy changes.
“Freedom is not free,” the professor said. “Every single person on this panel is putting in work. Are you?”
Malhora connected current questions about freedom to the creation of our country.  He said people don’t have to agree on everything, but that discourse is key.
“This is how the Constitution was written. It was a bunch of people who said we give a damn about our country,” said Malhora. “We don’t agree on everything, but we need to do something.”
Rice agreed.
“Do the work,” he said. “Be aware that it is work. We get confused and think it’s easy. Freedom takes work.”
Madeleine Deisen is a Junior Reporter for Youth Journalism International.
***
Your tax-deductible contribution helps students
supported by this educational, non-profit charity. Thank you.
HelpYJI.org