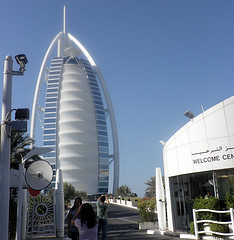 DUBAI, United Arab Emirates – In films, songs, ads, business, tourism and news, the Dubai brand touches every sector of society, but I would like to refer to this sandy emirate as the Big Apple of the Middle East because it inspires its visitors with its architectural wonders.

If you take a tour of this glazed, modern, business city, you’ll be assured that despite the current economic plunge, it will eventually turn into the world’s Big Apple.

Some may say it already is.

If you have never visited, reports of hot weather and sand may make you hesitate to spend your precious holidays in this sunny desert. But as you get off the plane, you will be astonished by the modernity, luxury and the air-conditioned facilities – starting with your arrival at its world famous airport.

Over the last three decades, this city’s booming business industry absorbed people from all across the globe, making the genuine Emirati population less than 20 percent of the overall number of inhabitants.

The spectacles of Dubai’s record-breaking architectural projects guarantee tourism, which is key to the city’s economy.

Off the coast of Jumeirah district is the 8th wonder of the world, Palm Jumeirah, the phenomenal man-made island which takes its shape from the country’s national symbol of palm tree along with its fallen fronds.

The multi-million dollar villas on this world famous artificial island are designed so their backyards open onto the beach. The villas are home to high-ranking businessmen and VIPs from across the globe, including Bollywood’s Shah Rukh Khan. At the end of the island is the sandy-colored Atlantis The Palm hotel, the sister hotel to the Atlantis in the Bahamas.

At another one of Dubai’s luxury hotels, the Burj Al Arab, the nightly rate is several thousand dollars, but it’s not a headache for the management to find guests in this eye-catching city. Shaped like a boat standing on end, it’s the world’s only seven-star hotel, and it plays host to the world’s top businessmen, diplomats, leaders and celebrities.

At the peak of the Burj Al Arab are a tennis court and a helicopter landing area for VIPs. Those who can’t make it inside the hotel can snap a photograph or two in front, and also enjoy the open Jumeirah beach that is immediately adjacent to the hotel.

Media City, the home for press, journalists, publishers, advertisers and hub of some major international broadcasters in the Middle East, draws companies such as BBC, Reuters and TEN Sports. 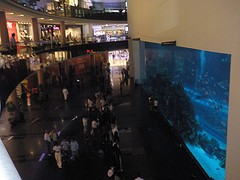 The Internet City, which serves the region as the software and technology source, includes major international names such as Microsoft, IBM, Canon and InfoTech. And the Knowledge Village hosts a collection of campuses from the world’s top universities. There are over 400 institutions operating in it which includes universities, training centers, professional centers and human resource companies, making it the source of excellence in this region.

The glamorous shopping malls in Dubai are yet another venue for almost all types of gratification – they’ve got cinemas, games, sport areas and a range of restaurants from McDonald’s, Pizza Hut and Kentucky Fried Chicken to Chinese, Indian, Italian cuisine and more.

The two most famous malls are also among the world’s biggest shopping centers, Dubai Mall and Mall of the Emirates. They’re home to the world’s top fashion retailers such as Harvey, Levi’s, Dolce & Gabbana, Timberland and Giordano, to name a few of them.

The enormous aquarium park within Dubai Mall is a must-see attraction of this massive shopping center. The mesmerizing creatures inside the water keep your eyes focused on them as if you’re watching the most important part of a movie.

The completion of the Burj Khalifa project revealed the essence of the Emiratis – they’re not yet ready to stop showing off their wealth.

The tallness of this record-breaking tower expresses the utter boldness and breadth of the Emiratis in business. This monster, 800 meters high with 160 floors, is the tallest building in the world. 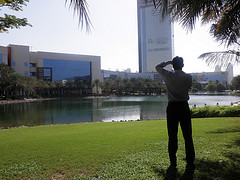 The city within the city, scheduled to be completed in 2011, is the Dubai Sports City. Occupying 50 million square feet is a dream vision of the Emirati sheikhs to create one of the premier sporting destinations in the world.

After its completion, Sports City will host games for soccer, cricket, hockey, indoor games, golf and tennis. In addition, it will also include residential apartments and top sports academies where athletes can train.

Despite being the region’s business hub, mainly due to the trade with oil-rich Arab nations, Dubai is only capable of supplying a narrow percentage of its own oil consumption and is dependent on the six other emirates which form the UAE to procure its oil.

All these hyper architectural projects going up in Dubai to produce a wonderland are the wise policies of its leaders to create reasons for international tourists to keep visiting – even if the oil trade isn’t important anymore.

For this reason, Dubai may well be referred to as “The Big Apple of The Middle East.”

Edrees Kakar is a Senior reporter from Afghanistan for Youth Journalism International.