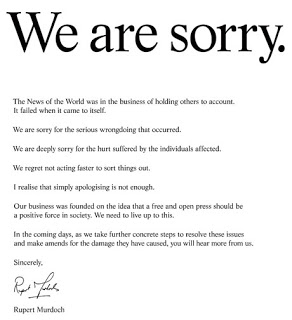 By Robert Guthrie
Reporter
Youth Journalism International
DUMFRIES, Scotland – Media baron Rupert Murdoch is at
the center of a story unfolding at an extremely rapid pace.
After controversy over phone hacking allegations
caused him to close down the News of the World tabloid a week ago, he has now
decided to cease trying to buy BskyB, a broadcast network.
This is a much safer option for him than plunging
ahead while controversy swirls around him.

Now the whole country is waiting to hear what Murdoch
and his minions have to say about it all.

The Australian-born media kingpin, whose holdings
include Fox News, The Sunday Times and the New York Post, has been invited to
attend a House of Commons Home Office Select Committee hearing along with two
News Corp. executives, his son James Murdoch and former News of the World
editor Rebekah Brooks.

This will allow the press, public and senior members
of Parliament to hear directly what Murdoch and company decision-makers have to
say about the hacking allegations that have tarred the Times as well the rest
of Murdoch’s papers.
All three have agreed to appear – failing to show up
would have cast great suspicion on them, after all – so the even should have
plenty of drama.
The House of Commons won’t have enough seats to
accommodate everyone who wants to see it in person. I wonder what they’ll do.
In the meantime, Brooks has succumbed to pressure and resigned
as chief executive officer of News Corporation. This is a good step forward,
although this will definitely not clear up this giant mess that has been caused
by the stupid activities of Murdoch’s employees.
During the Question Time at the House of Commons this
week, many MPs asked the prime minister questions about the hacking scandal.
The prime minister, David Cameron, said the
Metropolitan police will investigate the hacking claims and why it happened.
There will be reviews of press regulations, he said,
in terms of what journalists can and cannot do.
The police plans to contact all of the 3,870 known
victims named in over 11,000 documents, officials said.
But nobody knows how much further the scandal may
extend before it’s played out.
The prime minister said he wants to make sure that an
event like these hacking claims never happens again.
Cameron also said that executives involved in the
scandal should never be involved in the media again.
Hanging over that statement, of course, is the
question of what Murdoch himself knew and what that might mean for one of the
world’s largest media companies.
In a bid to turn public opinion in a more favourable direction,
Murdoch’s newspapers Sunday carried full-page advertisements that said “We are sorry.”
Beneath those words, Murdoch told readers he
recognized that apologizing isn’t enough.
Murdoch vowed to take “concrete steps” to resolve the scandal
and to “make amends for the damage” that his company’s activities has caused.