Business students form a human "peace sign" at the University of the Punjab in Lahore, Pakistan in December 2017.

According to a police arrest report quoted in the New York Times Cruz killed 17 people, 14 students and three faculty members.This is not the first time a school shooting has happened in America. In Connecticut at Sandy Hook School in 2012, 20-year-old Adam Lanza killed 26 people, mostly young children, after first killing his mother at home, according to CBSnews.com. It took less than 11 minutes.
Then another incident, also reported by CBS, took place September 13, 2017 at Freeman High School in the state of Washington. A 15 year old, Caleb Sharpe got weapons – a pistol and an AR-15, from his father’s safe and killed one student, Sam Strahan, who tried to stop him, and injured three others. 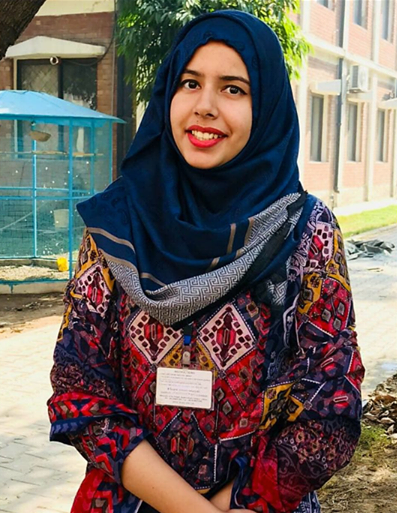 Amber Shakil at the Univeristy of the Punjab in Lahore, Pakistan.

Before the shooting at Florida’s Marjory Stoneman Douglas High School, the Louisville Courier-Journal newspaper in Kentucky reported that Gabriel Ross Parker, a 15 year old, is accused of killing two and injuring more than a dozen others at Marshall County High School on Jan. 23, 2018.
In Peshawar, Pakistan, a Taliban 2014 attack at the Army Public School in 2014 killed 141 people, according to the BBC, most of them students. It left everyone here in a state of unbearable horror.
All of these incidents make question whether the place which teaches us a difference between right and wrong, a place which promotes humanity, a place which every religion promotes, is safe or not?
I don’t understand what triggers these teenagers to pick up those weapons and make themselves ready to aim fire on innocent children and students. I don’t understand that how someone who is 15, 19 or 20 years old can commit such a heinous and awful crime.
Whether it is the failure of government, easy availability of weapons or guns, mental illness, illiteracy or being subjected to cruelty, these kinds of events are beyond endurance. Measures should be taken in order to solve all these issues to minimize the chance of these kinds of happenings.
This is not about a country, it’s about human lives.
In the race of life, the competition to excel and to get ahead of each other, we sometime forget what is right. In that sense of competition we get so madly caught up by the idea of taking revenge that we sometimes are not afraid of committing atrocious acts.
We as society lack patience and the art of forgiving others, of loving and accepting each other. We are so caught up in our lives that we don’t even know what phase of life our neighbor is going through. This ignorance can also lead to such acts.
But all of these incidents are intolerable. We Pakistanis as a nation stand against gun violence and we support all the families of the victims.

Amber Shakil is a Senior Reporter with Youth Journalism International.