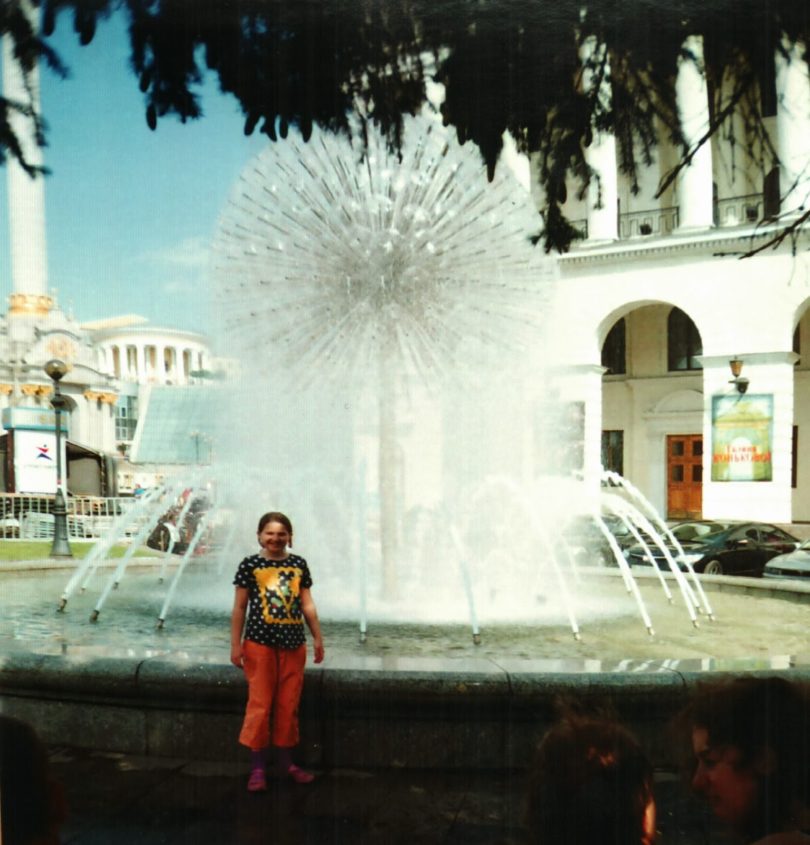 Yelena Samofalova in Kiev in 2008.

WEST HARTFORD, Connecticut, U.S.A. – Over the last few months, I’ve watched the country where I was born crumble from a safe distance of several thousand miles. Although I moved here from Ukraine when I was five years old, I still have ties to it and family living there.
My whole family has been devastated as we tune in to the news every day to see what else has happened. I’ve heard many sad dispatches on the events and especially on the current situation in Ukraine.

I was born and lived in Kiev, the capital of Ukraine, where the Euro Maidan protests have been held. I remember it as a beautiful plaza in the center of Kiev which we visited both times we returned to Ukraine after moving to America. I recognized everything there when I saw it on TV and in photos on the internet.

I felt terrible as it was destroyed.

I understand, though, that the people of Ukraine have been trying to send a message to their government and want their voices heard.
The revolts started when the president, Victor Yanukovych, decided not to sign an agreement with the European Union, wanting instead to be allies with Russia. His leadership was generally seen as corrupt and Ukrainians started protesting.
Demonstrations grew violent in January, when Yanukovych made a law taking away people’s right to protest and their freedom of speech. This is when people started hurling homemade petrol bombs in slingshots and buildings were taken apart brick by brick.

It was crazy to watch the destruction of the beautiful plaza where I once walked.

The protests have gotten complicated, though, since Ukraine is split in half because of language and cultural differences. People in the east speak and act Russian, while those in the west speak Ukrainian. I’ve heard about these differences my whole life, and how they cause conflicts.
Since I’m half Russian and Jewish, and speak Russian at home, I don’t fully support the government that has taken control of Ukraine and kicked out the president.
It appears now the country might split in two, with the place where I was born falling under the control of the new government that rose from the riots.
This weekend, Russia sent troops to Crimea, the southeastern part of Ukraine that extends into the Black Sea. When I saw the tanks and troops stationed there, I began to dread what might happen next.
I just want all the violence in Ukraine to end.
Yelena Samofalova is a Senior Reporter for Youth Journalism International.