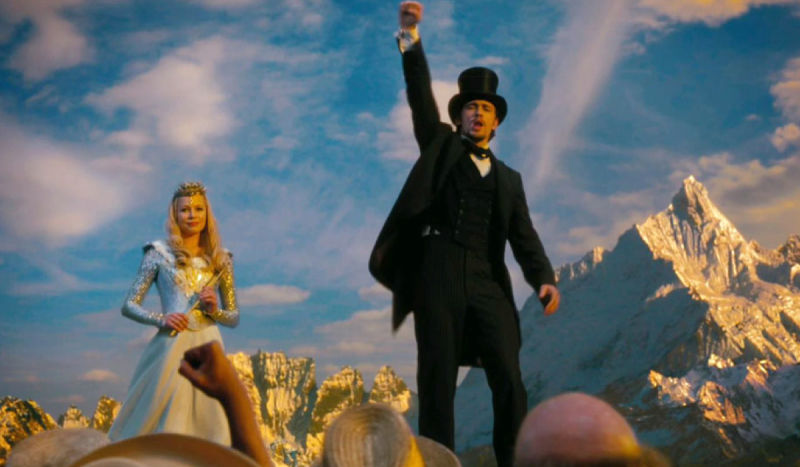 SEOUL, South Korea – Oz the Great and Powerful. But was he always so great and powerful?

Director Sam Raimi’s adventurous prequel to the original 1939 movie The Wizard of Oz shows a story of how one small-time magician becomes king of the magnificent Emerald City.
Oscar Diggs, who goes by the name of “Oz” on stage and is played by James Franco, dreams of one day becoming someone great, like his heroes, Thomas Edison and Harry Houdini. However, he works as a sideshow magician in a traveling circus with the help of his loyal assistant Frank, played by Zach Braff.

Oscar sounds like any other protagonist, the kinds with big dreams and a selfless heart. Yet because of his feelings of inadequacy and failure, he turns out to be more selfish than selfless. The “great” Oz is more of a womanizer, using some sob story about his grandmother’s music box to seduce women, then leaving a trail of broken hearts.
These lies and his trusty flirtation technique one day leads to him messing with the wrong person. The girl he happens to flirt with turns out to be the wife of the circus strongman, and he chases Oscar.
Luckily, Oscar manages to escape on a hot air balloon. Then bad luck comes kicking right back. A tornado comes and sucks him in, transporting him to the beautiful, vibrant Land of Oz, where he comes to be known as the prophesied wizard/king who will save the kingdom.
In the magical land, he meets the three witches. Theodora, played by Mila Kunis, turns into a green, big-nosed witch – possibly super terrifying to younger kids – out of the overwhelming feeling of betrayal. Her sister, Evanora, played by Rachel Weisz, is a manipulative witch with evil flying monkeys as pets. The two evil sisters reign over the terrified kingdom.
Finally, there’s Glinda the Good, played by Michelle Williams. She’s a princess-like witch who cares for the good people of Oz.
At first, the three are skeptical that Oscar is the mystical Wizard of Oz that has been told by the prophecies. He’s greedy for gold and takes things too easily.
However, with the help of loyal friend, Finley, also played by Braff, the
flying monkey in the bellhop suit, courageous China Girl, played by Joey King, and Glinda, he transforms and changes for the better, becoming the king everyone was waiting for.
Although this year’s Disney movie was not as magical as the 1939 original The Wizard of Oz, it was still entertaining with great characters. It’s unfair to ask Finley and China girl to fill the legendary shoes of Scarecrow and Tin Man, but Franco plays an excellent Oz as he sporadically thinks of schemes to keep his prophecy alive.
The film was a little ominous and there were numerous pop-up scenes, making it somewhat frightening for younger kids to watch. Not to mention Theodora and her awful seaweed green make up. The feud between the witches also got a little confusing because the background story of the witches was vague.
Director Raimi wittingly made it modern with a lot of artistic ideas, while keeping the classic feel of its old sequel. Oz the Great and Powerful is a fun and great family movie that can be enjoyed in 3D.
Yvette Hong is a Junior Reporter for Youth Journalism International.