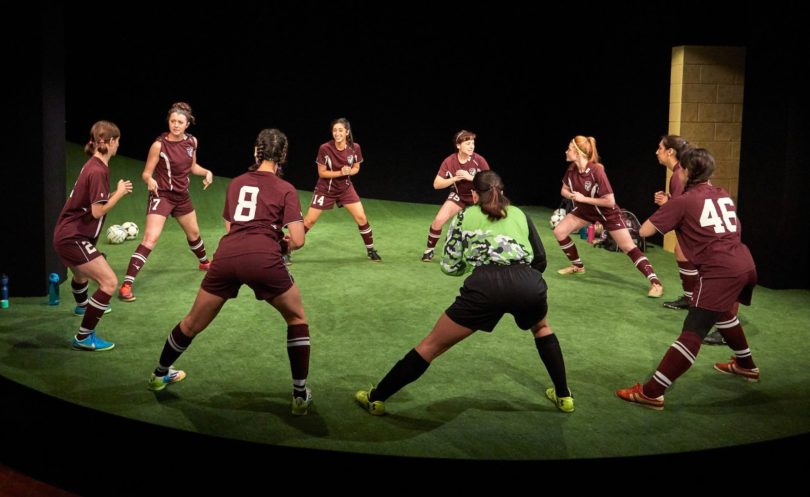 Following an up-and-coming soccer team known as The Wolves, the audience is exposed to how powerful the tool of illusion can be. Each of the players face their own problems that get addressed in their own unique manner, whether that may be publicly vocalizing them or conveying an idea through props and motions.

What is refreshing about this play however, is that the conflicts are not being forced on the audience one by one in a linear sense. They are presented in contrasting, abstracts ways that keeps the audience thinking about the bigger picture. Some conflicts aren’t even addressed at all, only acknowledged once they are resolved later in the play. DeLappe’s use of minuscule prop and dialogue changes made a huge impact within the story. Then the small cast and intimate staging easily pulled it off.
One drawback of this play is the lack of scenery changes and transitions. Almost all scenes take place on the turf, right before a match, leaving some disappointed with this lack of flow. However, DeLappe, who is a master at subtle change, may have purposely set up the play like this as to make the audience focus more on the dialogue and the characters.
For example, one of the players has Anorexia Nervosa, but instead of just telling the audience this by making her not eat, she alludes to the problem by having the character express how many concussions she has received while playing soccer. In the next scene, after several days have passed, she comes to practice with a concussion helmet on, telling her friends that her mom forced her to wear it after her last hospital visit.
Through these and other understated hints and tricks, DeLappe makes this play engaging.
Once we get to the ending, the team is united as they face a tragedy, one very personal to them all. Through this climactic event, we see the players’ personal problems quell, as grief can usually give insight to internal struggles.
What makes The Wolves a must-see, is the wisdom it offers on daily problems that you or loved ones may be facing, and how they can affect not only you but everyone around you. It makes The Wolves a modern, perceptive play that can give you guidance on your own life.
Now playing at TheaterWorks in Hartford, The Wolves closes Nov. 12.
***
Your tax-deductible contribution
helps student writers, artists and photographers.
HelpYJI.org