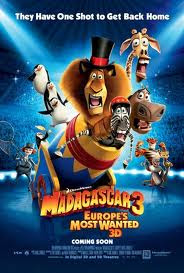 By Robert Mooney
Junior Reporter
Youth Journalism International
RICHMOND, North Yorkshire, U.K. – Madagascar
is a country with a hot climate and, at times, extreme weather.
The United Kingdom is far from there,
but it is where I recently saw Madagascar
3: Europe’s Most Wanted, which was released earlier this year.

Come along with Alex, Marty, Gloria,
Melman and friends as they go on another crazy journey back to their home in New
York.
This film, rated PG, is enjoyable for
all your family and friends and has laugh-out-loud moments throughout. As someone
who is almost an adult and likely not to be in the film’s primary target
audience, I found it still as funny as the first of the series released seven
years ago.

The story of every film in the series
leaves you wondering how the filmmakers keep coming up with ideas. Some are
references to things that the younger generation may not fully understand, but the
film is packed with classic jokes that stay in your head for a long time
afterwards. The Madagascar franchise
has been so successful that DreamWorks made a spin-off following the journey of
the penguins, Skipper, Kowalski, Rico and Private. Having already had their own
TV series on Nickelodeon and a short film made about them, the penguins have a
reputation to live up to.
If future series or films are made
and they are as spectacular and hilarious as the previous ones, it will be
something to look forward to. This film would usually have been pulled from the
cinema by now and fans would have the wait for it to come out on DVD but due to
its immense popularity it has stayed on longer.
DreamWorks have always made good
films and this one is no exception. One thing I like is that they are always
constant in what they do, introducing little themes or tiny details that run
through their films. One such theme in the Madagascar
films is the stupidity of the penguins: hijacking a ship, going gambling or
even boarding a plane and causing chaos. These animals have no control over
what they do, but I suppose that’s the fun of it. Where would the laughs be if
they didn’t get into these situations? No wonder they have their own series and
spin-off.
There is a possibility of a Madagascar 4 which will be another
massive hit, especially if it lives up to the standard of the most recent installment. Given that, who know
where the Madagascar journey will
take us next? The adventures of Alex, Marty, Melman and Gloria take us places you never expected (literally
and metaphorically), from being deserted on an island to joining the circus.
That’s the beauty of DreamWorks
films. They have some strange way of appealing to all ages. This is a good
thing for the filmmakers and the audience. It will be a challenge, but I hope they
can maintain this standard. Under the guidance of the right people, though, it
can be done.