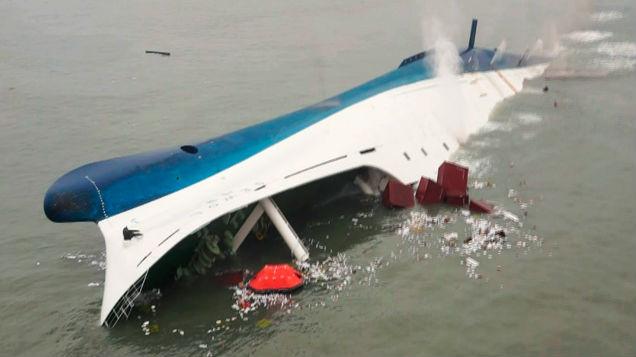 Sewol ferry (South Korea Coast Guard photo)
WINDSOR, Connecticut, U.S.A. — After a long world history class, I habitually opened the South Korean web surf site Naver and clicked on “most searched news.”
I clicked on Sewol ferry, the first words that popped up. This wasn’t any celebrity’s name nor did it seem like the title of a new movie.
What else could this be? I started scrolling down through all the titles of different news articles on the page and spotted the word “drowning.”
There was probably a sinking ship, which someone would have reported to the police and everyone on board was rescued. Nope.

The repercussions that the despondent citizens faced in Korea were nothing like the catastrophes in disastrous movies with heroes saving everyone in danger.
Students only a year older than I were facing the brutal reality of chaos in the cold and dark sea. Hundreds of people on board, the majority being students on a field trip, were dead or dying.
Sewol ferry instantly reminded me of the 1995 collapse of the Sampoong department store, which I only have heard of from my parents. I recall that it resulted in many deaths, but I remained hopeful for those on the ferry, as I realized that it is now 2014 with better technology than there was when the department store collapsed.
I also thought maybe the chief navigation officer of the Sewol ferry would be more responsible than the head of the Sampoong department store had been.
Ironically and depressingly, my hope for a superhero and a responsible leader were crushed as the news reported that many students were told to sit where they were instead of moving out to the deck.
As a high school freshman far from home, I’ve sometimes felt lonely, away from my family and friends, alone in a totally new environment.
But after coming back from my history class, I lay on my bed and imagined my small room sinking, and it getting harder and harder to breathe. Stop. This was too miserable for me to continue.
Compared to those students who were confined to the water who could have been my future friends, I wasn’t a lonely person at all. At least I had someone to talk to.
The doleful situation in Korea surged all the way to our school in America. We shed tears as we spoke of the couple who died at the same time, the teacher who saved his students and faced a bone-chilling death in the sea, and the message that was not delivered from a mom to her dead son. We all cried while hearing these lamentable stories and it lead us to an intense discussion on fraud, false reports, and social justice.
Korea was a very poor country that developed with incredible speed, even hosting the G20 Summit a few years ago. But while living busy lives, we’ve neglected one of the most important factors in life – what to do during emergencies.
No, we should not lie or ask absurd questions during a news report just to get more viewers. Yes, the media should only report what really is happening at the site.
No, people should not take commemorative pictures when families are crying in despair.
Yes, we should pray all together for the innocent lives lost during the calamity.
Hopefully we will learn from this huge mistake, always remembering the sacrifice of the students on the Sewol ferry.
Park, who attends high school in Windsor, Connecticut, U.S.A., is from Seoul, South Korea. She is a Junior Reporter for Youth Journalism International.