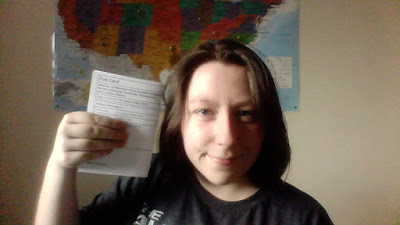 Voter and YJI reporter Felicity Rodger with her polling card. (YJI)
EDINBURGH, Scotland – Today, 16 and 17-year-old citizens like me voted for the first time Scotland’s May election, giving youth who thought their voices weren’t being heard the
opportunity to cast a ballot.

The chance has come where these important voters could sway decisions dramatically in the constituency where they live.
I had previously voted in the all-important Scottish Independence Referendum in 2014 as a 16-year-old so going to the polling station was not an unfamiliar experience.
So what makes the May elections different?
In Scotland, these elections will ultimately decide who the majority party will be in the Scottish Parliament at Holyrood. So far from all polls taken recently, the Scottish National Party looks like it will sweep the boards and win the majority without fail.
But the most interesting development to look out for will be who becomes the majority opposition party in the parliament. Polls have shown a battle for second place between Scottish
Labour and Scottish Conservatives has been too close to call in recent weeks.

Other elections taking place in Great Britain today include similar elections in Northern Ireland and Wales, council elections and mayoral elections, with the biggest being in London.
After last year’s huge general election campaign, the atmosphere in the United Kingdom has been significantly more low-key. One factor that definitely contributed is that the European Union referendum is coming up on June 23. With news headlines focusing on the EU referendum, these elections have become the lesser priority.
However, an important matter to consider is that for youth, especially in Scotland, the national voting age will stay at 18. That means more youngsters are turning out to vote in these local elections to have their say on the politics of the country even though they are still restricted in the national referendum.
Growing up in the United Kingdom at this specific time has opened my eyes to the political perceptions of both young and older generations. Lowering the voting age to 16 in Scotland has meant a higher involvement in politics by younger voters who may not have been interested in politics.
Referendums such as the one on Scottish independence and the EU vote have triggered engaging debates across the country including within schools.
The immense political developments in the United States have also opened eyes wider over here. Although Americans do not know it, we Brits are keeping an eye on all the primaries and debates and we are still fascinated by the sheer domination of Donald Trump in the Republican Party.
Elections and referendums across the world this year are too exciting to just sit down and watch. The May elections in the United Kingdom are the beginning, and I look forward to commenting on political advances throughout 2016, not just here, but across the world as well.
Felicity Rodger is a Reporter for Youth Journalism International.
***
Your tax-deductible contribution helps provide students worldwide
with free journalism education. Thank you for your help.
HelpYJI.org