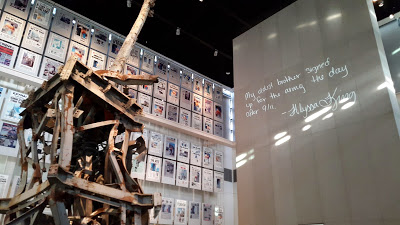 The broadcast antenna of the World Trade Center’s North Tower, destroyed in the terrorist attack of Sept. 11, 2001. Behind the tower are newspaper front pages from that time. (Van Nguyen/YJI)

WASHINGTON, D.C. – While attending the fall conference of National Scholastic Press Association, I had the precious opportunity to visit the Newseum.
This museum of news is truly an ideal place for student reporters and photographers to get worthy information about gathering news and gain insights into journalism.

Two exhibits at the Newseum attracted my attention the most: The Pulitzer Prize Photography Gallery and The 9/11 Gallery. 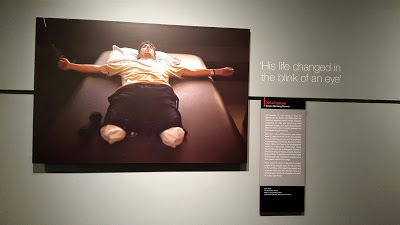 The Pulitzer Prize Photography Gallery consists of Pulitzer-winning photos and a documentary film featuring some photographers talking about the stories behind their famous images. 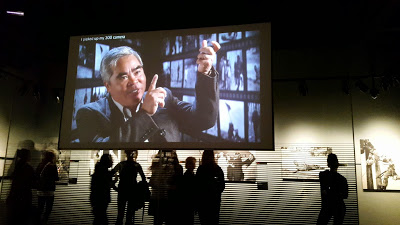 Vietnamese photographer Nick Ut appears in a documentary about Pulitzer Prize winning photos. In 1972, he made the iconic image of Huynh Thi Kim Phuc, a Vietnamese girl burning and running from a napalm attack that won Ut, an Associated Press photographer, the Pulitzer Prize the following year.  (Van Nguyen/YJI)

With indelible pictures, artifacts, and interviews with people on the scene, the 9/11 Gallery makes every visitor sadly remember the tragic terrorist attacks.
The centerpiece of the exhibit is the broadcast antenna from the top of the World Trade Center. On one wall are front pages from many newspapers covering the attack.

Along with others in the crowded exhibit, I silently read the front pages about that horrific day, and reminded myself to appreciate the present more. 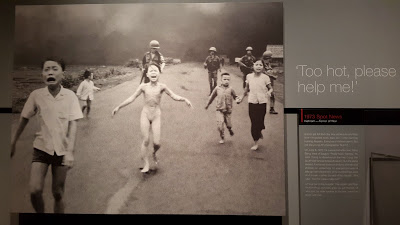 The 9/11 Gallery also shows a documentary film about the passionate photojournalist Bill Biggart, who died when the second tower at the World Trade Center fell.
He was the only working journalist killed while covering the attacks and some of his pictures are on display along with his equipment and press credentials recovered by rescue workers.
When his camera equipment was found, there were breathtaking images that he’d taken in his final moments as he moved ever closer to the burning tower.
Van Nguyen is a Reporter from Vietnam for Youth Journalism International. 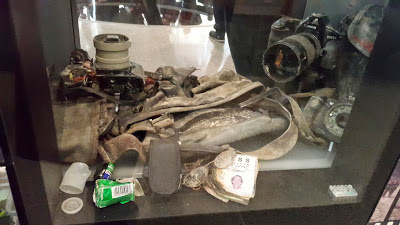 Cameras, a press pass and other gear that belonged to photographer Bill Biggart,who perished in the 9/11 attacks as he documented the scene at the World Trade Center, are at the Newseum. (Van Nguyen/YJI)

See Youth Journalism International’s overview of the Newseum, a piece that includes photos and information about the FBI and crime exhibit.


Read another piece of YJI’s Newseum package, this one by St. Louis area teen about her own realization after seeing the Berlin Wall.