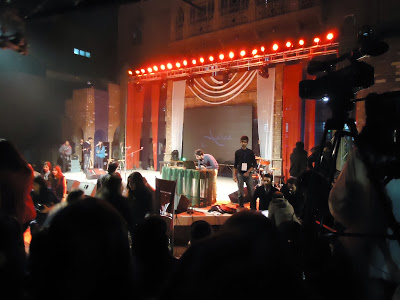 DJ Ezzu on stage at Kinnaird College for Women in Lahore, Pakistan, thrilling the audience. (Arooj Khalid/YJI)
LAHORE, Pakistan – Adorned with beaming, multi-colored stage lights, the ampitheatre of Kinnaird College for Women was ready to rock all night, and I was ready for my first concert.
The show, “Reel Around The Year ‘13,” was the closing ceremony for the college’s Business Week, and provided a much-needed break this month between the routine of class and the onset of exams.

Although it was a huge task to get through the lines outside the theatre alive, I made it in for an experience I will always remember.
The performers, decked in fabulous costumes, made sure that it was a memorable Friday night.
And the audience – all girls – was also attired in beautiful outfits for a night filled with many breathtaking moments.
Around 6:30, everything was set and the show was about to start.
“I was nervous because I’ve heard KC (Kinnaird College) has the most beautiful girls in Pakistan,” said Shahzad Shah, who hosted the show and provided the audience with a lot to remember.
If the entertainment overload of being with friends and attending a concert by many of Pakistan’s music sensations wasn’t enough, DJ Ezzu got the party started by performing first.
And then the band Sheikhoo came along and performed some hit songs by others and their own. Ending their part with “Hamesha” by another band, EP, one of my favorites, they absolutely rocked the stage.
The whole ampitheater went lasting louder than anything while the lights made it feel like a disco. Then the great artist Sami Khan took the show away by performing his famous hit song “Mein Yaad Aaonga” from the 2001 movie “Lagaan: Once Upon a Time in India.” 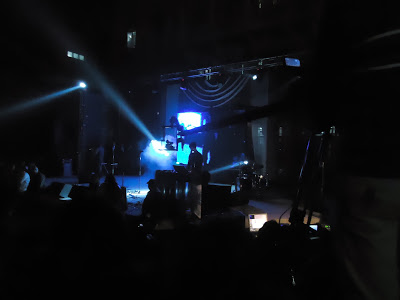 ‘Reel Around the Year ’13’ at Kinnaird College for Women capped the school’s Business Week activities. In this photo, DJ Ezzu is performing. (Arooj Khalid/YJI)

I loved his performance the most.
And then, the announcement of Billy X made the girls scream really loud and shouts of “Juttni,” his famous Punjabi rap song, could be heard. But Billy X, who had a separate jacket to match with every song, saved his hit for last.
The final act, the Pakistani internet sensation Abdullah Qureshi, stood out as he took over the stage and gave one of the best performances of the night.
When he came on stage he saw someone in the audience waving a drawing. He called them up on stage. It was a sketch of Qureshi that a girl had made.
He took it and said he would keep it with him.
“This is why I love Lahore,” he said. “This is why I love KC!”
It wouldn’t be wrong to say that most of the performers won the hearts of all the girls.
The concert ended with an outstanding performance by singer Uzair Jaswal around midnight, bringing an awesome finish to my first concert and one of the most amazing nights I’ve ever had.
Arooj Khalid is a Senior Reporter for Youth Journalism International.