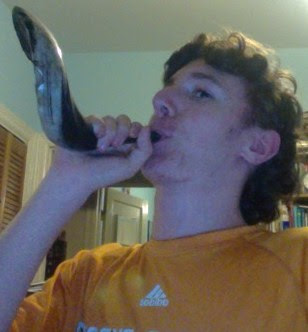 Rosh Hashanah is, to oversimplify, the Jewish
New Year. The name comes from the Hebrew for “Head of the year” (ראש Rosh means
“head”; השנה means “the year”) which means the beginning of it, but in a more
literal way.
Maybe that’s what the guy who gave Rosh
Hashanah its name thought, anyways. When you tell people about what it
literally means, you tend to get confused looks.
It’s the first of the High Holy Days in
Judaism. Sadly – for, perhaps, some Californians – that doesn’t mean Jews the
world over light up some currently illegal drugs to “find themselves.”

Nope. It’s basically one of the most important
days of the Jewish year. Didn’t mean to scare you prospective converts away,
though.
Why’s it so important?
“It’s the first day of the Jewish year. Duhh.”
Heyy! Look who decided to come to Hebrew
school today! You want some raisin challah? It’s a special kind of challah
that’s braided and twisted and it looks great, but … it has raisins.  I stay away from it, because I hate raisins
with a passion. I’m tolerant of religions, not fruit.
Or how about some apples and honey? You eat
them on Rosh Hashanah to symbolize a “sweet New Year,” which is about as corny
and obvious as how in some Scout troops when you give a “round of applause” you
clap your hands in a circle. But still. It’s a big crowd pleaser.
Now me, personally, I turn down the apples and
honey when it’s offered to me; not because I’m some evil, bitter, old man who
doesn’t like apples and honey, but because I don’t like apples and honey. Can’t
help it. Anyways.
Another crowd pleaser on Rosh Hashanah (and
the High Holy Days) is the blowing of the shofar.
The shofar is basically a ram’s horn that’s
got a really cool, curvy shape. It looks great. A drawback to that is that
unless you’ve practiced blowing it – obsessively – it doesn’t sound good at
all.
So, if you know what you’re doing when you
blow it, the sound that comes out sounds regal – fantastic – like Morgan
Freeman, all rich and full and the perfect voice to narrate those Visa
commercials you see during the Olympics.
If you don’t know what you’re doing when you
blow it, …
Let’s not go there.
Back to the ram’s horn. The shofar is blown in
a certain order during Rosh Hashanah services. If you don’t blow it in that
order, you very well could get struck by lightning (What? Technically anything
could happen…) and that sure wouldn’t be a good way to start the year.
The blowing order, while certain, tends to
vary from branch to branch of Judaism, depending on how conservative or traditional
you are.
First is Tekiah, when the shofar is blown for a
moderate-to-longish amount of time. Next is Shevarim, when three or nine notes
from the shofar are blown quickishly.
Next, Tekiah again.
Then Teruah, which is nine very fast notes
from the shofar.
Following Teruah comes Tekiah again.
Finally is Tekiah Gedolah. Oh, this is the
good one! This is the one where the rabbi/cantor/shofar-blower blows the shofar
for as long as they possibly can without falling over and dying.
That sound like a long time? Well, it is.
I’ve seen faces turn red, faces turn pink, and
notes just kind of fizzle out because the shofar-blower doesn’t blow into the
shofar correctly. Sometimes they look so desperate to get some air that you’d
think some of the more intensely religious members at the service would pray
for them, to get just that last little bit of air for one awesome shofar blast.
A final custom of Rosh Hashanah – though not
the only one, oh God, there are a lot of them – is to toss out bread crumbs in
some water.  No, not like a glass of it.
That won’t fly with your rabbi. Try more like a lake or river or some body of
water.
This symbolizes “casting away” your sins, if
you will. Some folks also toss pebbles in, or toss those in instead of the
bread. Either one works, really.
Anyways guys, hope you all have a Shanah Tovah
– a good year!