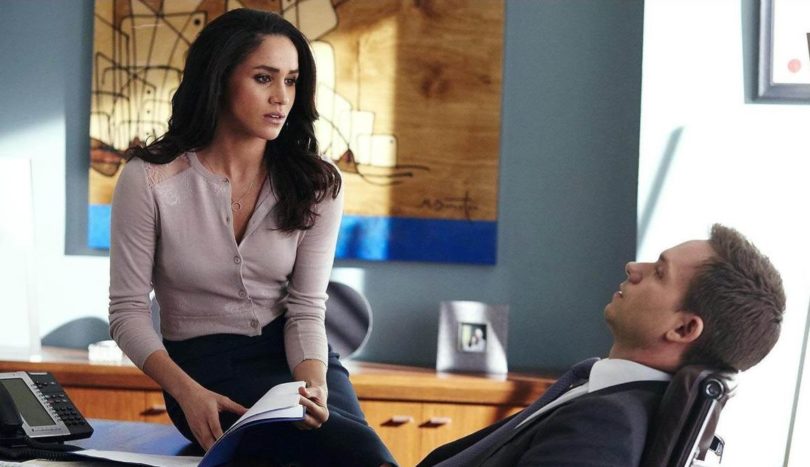 Meghan Markle and Patrick J. Adams on "Suits."
HANOI, Vietnam – Everybody likes men in suits and it gets better when they, in high-class, tailor-made garments, engage in fiery, intellectual debates.

In the television series Suits, Harvey Specter, a respectable lawyer of the firm Pearson Hardman who is played by Gabriel Macht, works hand in glove with his associate, Mike Ross, played by Patrick J. Adams. Together, they try to win as many lawsuits as you can imagine.
If you’re interested enough to look into the movie’s premise, Mike Ross beat considerable odds to land his position at Pearson
Hardman. His trouble lies in the fact that he never went to law school, but practices law in a firm that admits exclusively Harvard graduates. But as soon as you’re seriously hooked onto the show, you won’t care as much about his well-kept secret as how these two partners win case after case.
As Harvey Specter says, life is always lower than you want and unexpected twists and turns are bound to be in your way.
I can’t get enough of this show, partly for its sense of intellect and class and also for the smart writing. Along with the writers’ clever portrayals of distinctive characters are great performances by seemingly little-known actors.
I’m impressed by the characters’ wit, both in their professional work and in their everyday speech. It may get mind-twisting sometimes, but verbal maneuvers are a must for successful lawyers and a challenge to the viewer’s mind is so much better than a predictable plot.

The main characters show a peculiar way of persuading others to agree. Through tone of voice and choice of words, they exhibit quick thinking, humor, boldness, and determination – the talents of every good lawyer.
Maybe the writing has won me over so much that I pay little attention to Mike Ross’ entangled relationships throughout three seasons.
There should be romance in the show or it would be too dry for the audience to keep buying it. Some can be moderate, interesting and different, especially if it’s Harvey Specter’s. But whenever it comes to Ross and his complicated relationships, I would prefer a fast forward
button.
No offense to the actors, who are amazing, but all the reasons that make me like Suits turn me against this kind of dreadful drama.
I’ve seen way too many shows in which characters are eventually coupled, all so arbitrarily, for the sake of draggy drama. Nothing annoys me more than the irony of knowing how cheap a series could gradually become since eight seasons bring in more profits than three.
Suits wrapped up its third season in mid-September and will soon return in 2014 for the fourth. But before we worry about the series dragging on too long, let’s first embrace the sharp, fresh air Suits brings to the current crop of television series.
Chi Le is a Reporter for Youth Journalism International.