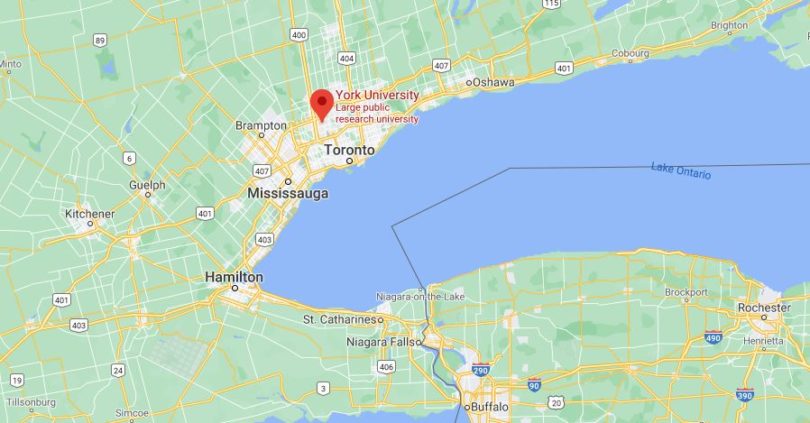 TORONTO, Canada – A fire interrupted classes and exams at the Keele campus of York University this month.
No one was killed in the December 13 fire, which shut down the steam boilers and co-generators and damaged the roof, a steam boiler and electrical cables in the Central Utilities Building, according to the university’s website.
There was no heat or hot water going into the buildings on campus and the temperature fell to -14°C, causing the university to briefly close the campus.
Classes and exams resumed December 15.
The fire started about 1 p.m. and firefighters managed to completely extinguish it by about 4 p.m., but about 4,000 students had to leave their residences on campus and more than 1,000 were relocated to hotels for a night.
Beds were also set up by the Red Cross in the Rexall Centre.
The disruption in the middle of exams – and unexplained delays in relocating students – upset some.
In some cases, students waited for several hours – without information from the university – for buses to take them to temporary housing.
“There was a lack of communication,” said John Lawrence, a PhD student in political science.
Linda Ding, a fourth year accounting student, said, “Things weren’t done efficiently. I had to call the housing office to get information.”
Students started gathering in the lobbies of their residences from 7:30 p.m., but buses did not arrive until 9 p.m. and at many residences buses arrived near midnight.
Students at the Atkinson Residence, many with families and small children, waited for two and a half hours until a bus finally arrived at 10 p.m. to take them to a hotel near Pearson International Airport.
“I wasn’t concerned about myself, I was concerned about the people with families,” said Lawrence. “Their emergency response was very slow and the fact that they failed when there was no heat or hot water questions how they would have reacted if it was a real emergency.”
Lawrence was also shocked that there was “no police presence” in a situation dealing with such a large number of students.
“The people in the housing office told me not to use any electrical appliances and said I could only use one light and one computer. They said the water pipes could burst anytime, but at the same time they kept us in the lobby for two and a half hours,” said Ding. “It makes me question how concerned they really are about our safety.”
Vouchers were handed out for food and each person was given a $50 limit for that night and another $50 for the next day.
Students were also told that they had a choice to either stay in their apartments or go to the hotel. Those who chose to go to a hotel were told they had to check out by 11 the next morning.
In at least one case, the bus that was sent was very small and got overcrowded. Many students, who had been waiting since early evening, stood through the hour long bus ride and were checked into the hotel around midnight.
The next morning, students gathered in the lobby of the hotel and checked out, but the university did not send a bus there until later that afternoon, so the displaced students waited through the lunch hour without food.
“I think it was very disorganized,” said Julie Bergevin, a fifth-year theater student. “It was really frustrating and unfortunate that we did not get here and were checked in until almost midnight and that we had to leave at 11 this morning, because it didn’t really give us an opportunity to settle in and get anything done. “
Bergevin speculated that even though the heat wasn’t yet operating on campus, the students had to leave the hotel so the school wouldn’t have to pay for another night.
Mehran Shamit is a Reporter for Youth Journalism International.