KARACHI, Pakistan – While the right-wing political forces of the country under the leadership of the political party Pakistan Tehreek-e-Insaaf (PTI) insist on blocking trucks carrying NATO supplies towards Afghanistan, U.S. Secretary of Defense Chuck Hagel reportedly ‘warned’ Pakistan that in such circumstances, maintaining American aid might be difficult.

What PTI and its allies fail to understand is that the U.S. has been the biggest bilateral donor – a nation that provides direct support – to Pakistan for years, supporting both economic and military initiatives in the country.
The United States got off to a good start with economic support to Pakistan under former Pakistani President Ayub Khan. Having ambitious plans for economic development, Khan began a long partnership with the U.S. And thereafter, Pakistani leaders time and again have won American support, receiving huge amounts in economic and security assistance.

Some estimates put the figure at more than $45 billion to date.

Since its formation in 1961, the United States Agency for International Development (USAID) has addressed the bulk of U.S. bilateral aid. It is directly responsible for most of the development initiatives including economic development through building infrastructure, bringing new ideas into the economy, strengthening education, environment and political systems as well as investing in global health support. It is managed through government contractors, consultants and non-governmental organizations. 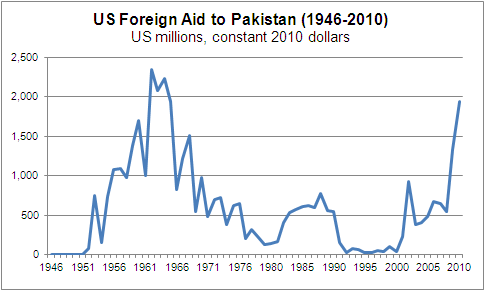 American aid proved to be fundamental during the 1960s and it focused on both military and civilian economic institutions. This era is particularly known as the “decade of development,” which recorded unprecedented levels of GDP growth and industrialization. Foreign assistance was undoubtedly crucial in spurring this development. Huge investments in power, irrigation and infrastructure were made which led to the completion of the Mangla and Tarbela dams.
Economic assistance through USAID helped finance local education projects such as the establishment of the Lahore University of Management Sciences and the Karachi-based Institute of Business Administration.
U.S. military assistance supports Pakistan’s military through loans and grants for defence equipment, training exercises and military operations to resist external aggression and maintain internal security. It is jointly administered by the U.S. State Department and Department of Defense. Over the years, the U.S. helped an initially ill-equipped Pakistani military develop infrastructure, improve command, control and communication as well as intelligence capabilities. Pakistan’s army, navy and air force to date has received more than 100 Sabre F-86F aircrafts, several hundred M47 and M48 Patton tanks and artillery equipment, 17 F-16 aircraft and PNS Alamgir Frigate, helicopters and two P-3C Orion Surveillance and anti-submarine aircraft.
Despite all this, the issue of foreign aid effectiveness is loaded with disagreements. While U.S. aid to Pakistan was fundamental in spurring economic development during the 1960s, there have been major faults in aid strategy since the U.S. began its withdrawal from Afghanistan, which included slow release of funds, lack of transparency and capacity, and not having any high profile projects for the Pakistani society. The flip-flops and structural breaks involved in civilian aid delivery have affected existing programs.
In recent times, rather than development, the unspoken intention of aid has actually been to improve the image of the United States – lessening of the growing anti-American sentiment among Pakistanis. While there is a lack of commitment and effective strategy to check if the money is being used appropriately, most of the programs are concentrated in the Fata region where security concerns, limited resources and high administrative costs have hampered U.S. goals.
And the distribution of funds has not been transparent, resulting in corruption – money mostly ending up with contractors and political actors involved.
Military aid, on the other hand, has in fact dis-incentivised democracy in the country. U.S. support and maximum aid for the military rather than civil projects has limited the government’s control and its ability to react to economic challenges. Research shows that while Pakistan’s military received aid, the economy suffered. This is primarily because military aid has no developmental priority and whenever there is a huge aid inflow to the military, it gets involved in a border exercise, which indirectly proves to be much more costly than intended. In the War on Terror, Pakistan’s economic loss reached $68 billion as of 2011, an amount much more than the mere $19 billion it received in aid since 2002.
To make U.S. aid work in Pakistan, a two-tier – internal and external – strategy needs to be adopted to avoid the misuse or mismanagement of foreign aid. While there is a need for policy reform on the part of the Pakistan government, the United States must also ensure “effective” aid delivery.
The U.S. mission needs clear goals and must be separated from the security program. We need to move beyond military and covert operations, and a closer scrutiny to eliminate corruption and ineffectiveness is now needed. Transparency can breed trust, change public opinion and bring about concrete results. Another way is to strengthen the civil-political institutions of Pakistan – civilian aid should never be utilized for military purposes.
All in all, I believe, economic development in a fragile country like Pakistan is not easy, and if the U.S. wants to make a meaningful contribution to our economy, it has to give us an opportunity to recover from errors, reduce the corruption in the process and ensure continuing civilian aid as promised.
Waleed Tariq is an Associate Editor for Youth Journalism International.