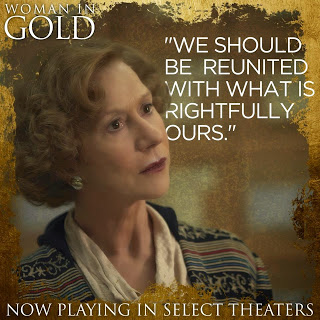 LEWISVILLE, North Carolina, U.S.A. – The Holocaust had an obvious impact on the lives of millions of Jews during the ‘40s, but it also influenced culture, and that effect is at the heart of the film Woman in Gold.

Woman in Gold explores the struggle of a Holocaust survivor to regain a family treasure stolen by the Nazis during the Anschluss of Austria, or when Hitler annexed Austria in 1938, unifying it with Germany.

Maria comes from a Jewish family in Vienna. She loves her family and is especially close to her aunt, Adele Bloch Bauer, played by Antje Traue.

One day, “Tante” Adele shows Maria a painting of herself commissioned by renowned artist Gustav Klimt.

As the Anschluss occurs, most Austrians become fervent Nazis and are sympathetic to the anti-Semitic feeling so prevalent in Germany. The Nazis take over Maria’s house and steal many of its treasures. The painting of Adele is taken and Maria is forced to make a thrilling escape to America.

More than 60 years later, the painting of Adele is in the hands of the Austrian government, and is a modern symbol of Austria. With the help of attorney Schoenberg, Maria goes all the way up to the United States Supreme Court to retake the painting that had once belonged to her family.

Woman in Gold impresses in most every aspect. Its compelling and emotional narrative and its panoramic cinematography are perhaps the clinchers.

From the beginning, the authenticity of the film is apparent. All conversations are carried out in the appropriate language and the impeccable acting by all of the cast no doubt contributed.

With many of its scenes filmed in Vienna, the film provides beautiful panoramas of the Viennese landscape and intricate close-ups of the beautiful architecture in the Austrian capital. Flashbacks are also effectively utilized – the time period switches back and forth in a way that viewers can understand the historical and personal significance of the scene.

Women in Gold is an excellent film suitable for most any viewer. It shows the lifelong struggles of Holocaust victims and how the perseverance of one woman was heard around the world. The film serves as a reminder about the danger of anti-Semitism and racism and as a memorial to Holocaust victims.

As Maria’s parents chillingly said before she fled, “Remember us.”

Rahul Krishnaswamy is a Junior Reporter for Youth Journalism International.