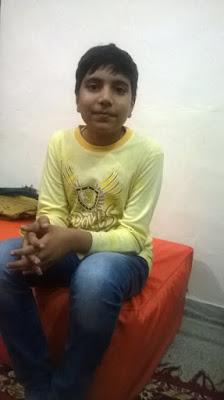 Ahmed Iqbal, 11, had an earthquake experience that scared him. (Amber Shakil/YJI)

LAHORE, Pakistan – An earthquake can be really scary, especially for a child.
Eleven-year-old Ahmed Iqbal of Lahore, Pakistan, remembered what happened when he felt an earthquake for the first time this week.

The earthquake struck northern Afghanistan Monday, Oct. 26, and measured a magnitude of 7.5. People felt it around the region, in Afghanistan, Pakistan
and India.
Ahmed said that he was in his house when he started to feel the vibrations. He was standing, Ahmed said, talking to his cousins. One of the cousins was lying on a couch and they all were talking and laughing.

Then suddenly, they all felt some shaking. His cousin fell off the sofa and Ahmed tripped.

Then his mother and brother realized that it was an earthquake and all of them got out of the house and sat in the lawn by the wall.
“I was so scared at that time that I had no idea that what was happening, why are we sitting on the ground and why everything is shaking,” the boy said. “I saw the fans moving like they are gonna drop.”
Just as they were thinking that they should move, because if the earthquake didn’t stop, the wall could fall on them, a large branch of the tree fell just a few inches in front of them.
They all got really scared, Ahmed said, and began to reading holy verses. Finally, the shaking stopped and their maid came from the backyard and asked them to come into the backyard as it was safer than the front lawn.
Ahmed and his family went there and waited in case there were any aftershocks and his mother contacted their family members to make sure that they were okay.
Amber Shakil is a Junior Reporter for Youth Journalism International.