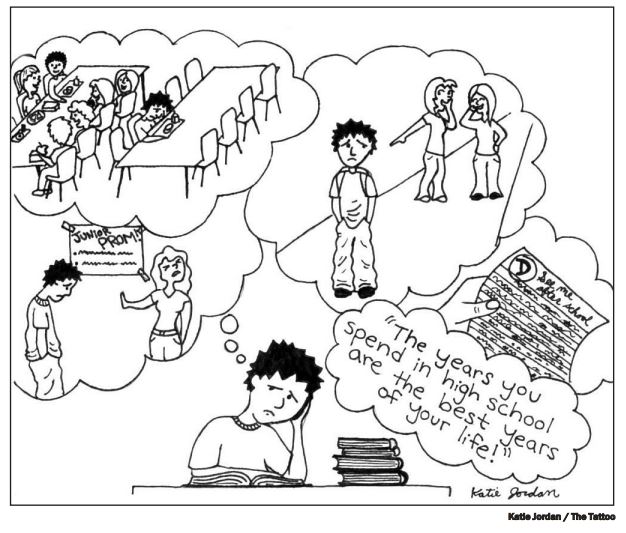 Nobody is happy all the time.

But if your feelings of sadness seem to be permanent, you may be clinically depressed.

John Mingel, program manager and counselor for the Wheeler Clinic’s help line, said the 24-hour telephone outreach handles about 30,000 calls a year, many of them from young people from the Bristol area.

“A good percentage would be teenagers,” Mingel said. Teenagers everywhere suffer from depression.

Toomey said that many students feel confused about who they are and where they’re going.

But confusion isn’t out of the ordinary for teens, he said. And neither is being depressed.

“Depression is normal, but to stay depressed isn’t,” said Toomey.

There are several important causes of depression in high school students. Both Mingel and Toomey cited loss, rejection, and abuse as the main reasons that teens become depressed.

“These are difficult problems for anyone, especially an adolescent,” Mingel said.

Whatever the cause, depression can have some very serious effects on teenagers.

Some teens turn to mood-altering drugs and alcohol in an attempt to get over difficult emotions, said Mingel, but others may take even more drastic measures.

“There is a direct connection between depression and suicide,” Mingel said.

Mingel said that about 10 to 20 percent of calls to the clinic’s suicide line are teens, although they also hear from all other age groups.

Toomey also said he hears from suicidal teens. Fortunately, those discussions are rare, he said. As a nurse, he’s also seen cases where teens have tried to kill themselves.

But there are ways to help prevent these problems.

Although it’s obvious that more must be done, Mingel said, the school system has made an effort to help depressed students.

There are guidance counselors, social workers, and teachers who can talk to students about their problems, said Mingel.

According to Toomey, the opportunity to talk can be a big help to teens dealing with depression.

He said that teachers must try to create an atmosphere where students feel safe to say what’s on their minds.

But teachers, social workers and counselors aren’t the only ones who can help teens deal with depression.

Mingel recommended that teens reach out to each other, as well.

Teens who have a friend who seems to be suffering from depression, Mingel said, should talk to the person and listen to the reasons they give for being upset.

Then, they should evaluate how severe the problem is, he said. It’s important to keep communication going.

But Mingel also stressed that teens should not swear to keep secrets for a friend. If the person has a serious problem, Mingel said, you should tell his or her parents

or the school system and get them the help they need.

There are also help lines, like those at Wheeler Clinic. They’re confidential and callers speak to trained mental health workers.

Teens who are depressed sometimes feel like they’re alone. But the truth is, they aren’t.

“They can get help,” Mingel said.