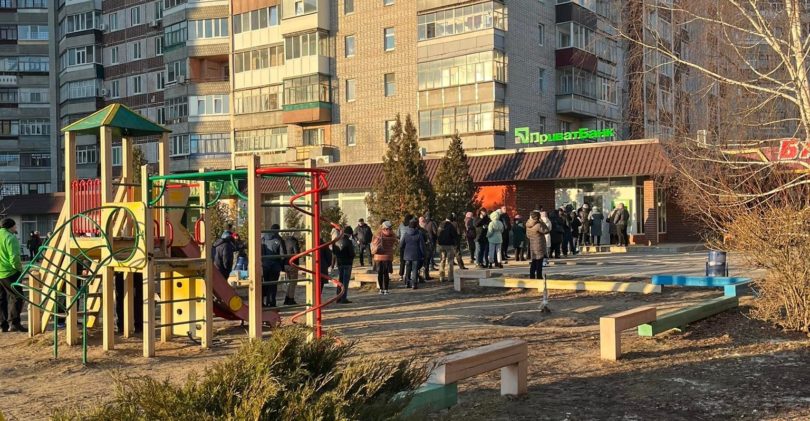 People in Lozova, Ukraine, line up to access a local bank. (Tanya Tkachenko/YJI)

Lozova, UKRAINE – Here in the Eastern Ukrainian city of Lozova, citizens are safe for now, but people are worried.

The city is about 150 kilometers, or 93 miles, from the regional capital of Kharkiv, which has been attacked non-stop for the last few days.

Many people have family or friends in Kharkiv, and are texting them every couple of hours, even during the nights, to make sure they are safe.

There is a lot of fake reports on social media saying that neighborhoods in our cities are being attacked, but the Ukrainian government records videos every day explaining the current situation.

Russian media outlets are definitely fake – they don’t even use the word “war” and citizens cannot learn the truth from them.

People are worried about supplies of food and medicine but there are volunteer groups who are helping.

Some residents are still going out, and there has been panicked buying of food. Many shelves in the big grocery store are empty. There is no bread, cookies or water. (Story continues below photos.)

Some smaller shops still have supplies.

Residents are lining up to get cash from their banks in case their credit or debit cards are blocked.

People here are not starving but in general are feeling stressed. There is no school or work.

The people of Lozova can often hear sirens because they turn on every time Kharkiv is being attacked. Each time, people here wonder whether it is Kharkiv or Lozova this time.

Tanya Tkachenko is a Junior Reporter with Youth Journalism International.

I want to spread the word about the current situation in my country.

I’m feeling scared because I see the news about people out there dying, but that also feels unreal. I’m still processing that it is actually in Ukraine.

I’m angry because I see people from my generation from other countries on social media not realizing what the war is. There are people on Instagram and TikTok who mostly joke about the war. Even though we Ukrainians joke sometimes too, it still feels like they don’t know the limits to this kind of ‘humor.’

We watch lots of Russian bloggers on YouTube and social media, listen to Russian music. Now, when we are in a situation where we need support, they are too afraid of their government to say anything publicly. They’re staying silent, but a lot of my international friends show great support.

I’m worried about the future, when this will end and what we will do.