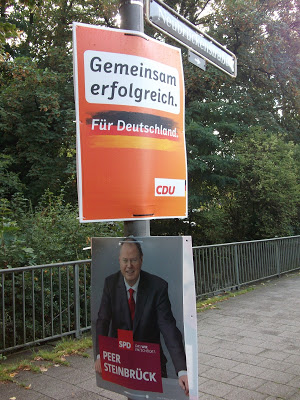 By Katie Grosser
Associate Editor
Youth Journalism International
MÜNSTER, Germany – Germans will be taking to the polls Sunday, and up for grabs are all 598 seats – or more, if extra
seats are required – in the Bundestag, the main legislative house in Germany. The outcome of this election will resonate in the rest of the world.
Currently, five parties are seated
in the Bundestag. The governing coalition under Chancellor Angela Merkel comprises
the Christian Democratic Union/Christian Social Union of Bavaria, the main
conservative parties in Germany, and the Free Democratic Party, the classic
liberal party. The opposition is made up of the Social Democratic Party, the
Greens, and the Left, which describes itself as democratic socialist.