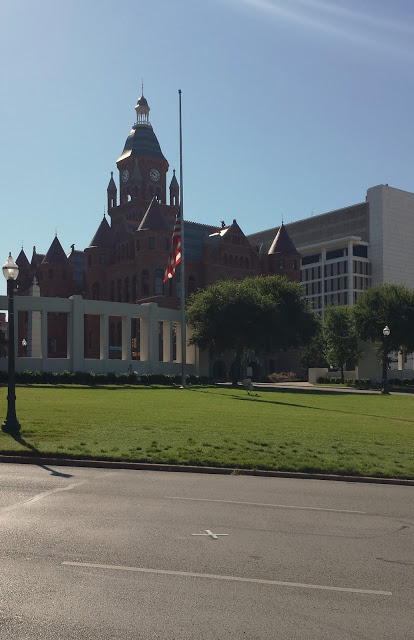 Heartache in Dallas: Flags were flying at half mast last week in Dealey Plaza in the wake of the murders of five police officers in the city and others in Baton Rouge, Louisiana. In the foreground is the X that marks the spot where an assassin's bullet struck President John F. Kennedy in 1963. (Garret Reich/YJI) 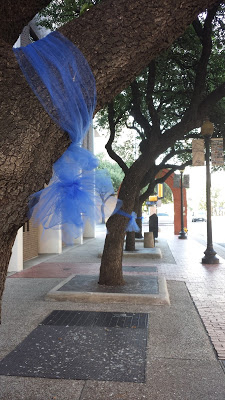 Trees around El Centro College are tied with blue ribbon in honor of the fallen officers. (Garret Reich/YJI)

DALLAS, Texas, U.S.A. – From afar, El Centro College looks like an ordinary building in downtown Dallas. Cars are parked on the curb and people start to mill around nearby as the day begins.

But a closer look tells a different story. Two weeks after a fatal shooting there, remnants linger of the memorial for the five officers killed July 7 by a single gunman.

Micah Xavier Johnson, 25, aimed at police officers working in a crowd of peaceful protesters at a Black Lives Matter gathering.

Johnson’s killing spree followed the shooting death of a black man, Alton Sterling, by police in Baton Rouge, Louisiana, during a time of rising tension between police and the public. After the attack, Johnson fled into a garage near El Centro College, where a standoff ensued. Police ultimately used a robot to detonate a bomb that killed Johnson.
Now, trees lining the sidewalk around El Centro College are decorated with blue ribbons to commemorate the lives lost during the attack.
The flowers that were part of a memorial are gone now, but one wilting bunch remained tied to a barricade by the college – a solemn reminder of what transpired.
Flags around the city flew at half-mast as the city mourns the loss of these and other officers killed in the line of duty.
It’s a simple gesture that shows that although the community is looking to move on from the tragedy, the memory of those lost remains preserved.
The ribbons and flowers are a testament to the fact that, despite the fact that tensions are increasing between law enforcement and the public, both have each other’s back in times of tragedy.
Mugdha Gurram is a Senior Reporter for Youth Journalism International. 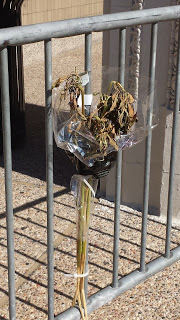 ***
Your tax-deductible contribution helps students
supported by this non-profit organization. Thank you!
HelpYJI.org