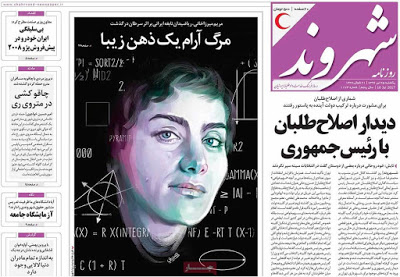 The Iranian newspaper Shahrvand Daily’s report on Maryam Mirzakhani’s death with the headline, “The Gradual Death of A Beautiful Mind.”

TABRIZ, Iran– Iran is grieving the loss of Maryam Mirzakhani – the nation’s most eminent mathematician over the last decade – who died July 14 after a breast cancer battle at the age of 40.

In 2014, Iranian born Mirzakhani became the first woman to win the Fields medal, also regarded as mathematics’ equivalent of the Nobel Prize. 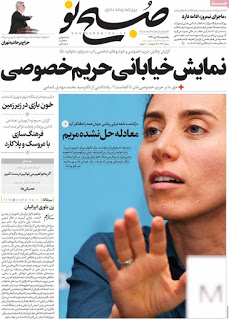 The Fields award acknowledged her great contributions to mathematics, specifically focused in Dynamics of Moduli Space and geometry. Her family confirmed her death to the Mehr News Agency of Iran on Saturday. Stanford University, where she had been a mathematics professor since 2008, followed with a statement.
“A light was turned off today, it breaks my heart … Gone far too soon,” said Iranian NASA scientist Firouz Naderi on Twitter. “A genius? Yes. But also a daughter, a mother and a wife.” 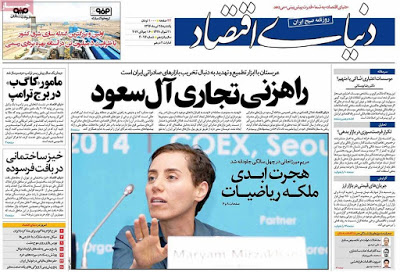 The daily newspaper Donyay-e Eqtesad  reported on Maryam Mirzakhani’s death with the headline, “The Eternal Journey of The Math Queen.”

Iran mourned this loss with messages and tributes of love and condolences through social media.
President Hassan Rouhani expressed his great sorrow by a statement on his official Instagram page.

“Unprecedented intelligence of this creative scientist and modest human being, that made Iran’s name resonate in the world’s scientific forums, (and) was a breakthrough in showing the great determination
of Iranian women and young people on the path leading to the peaks of glory … in various international arenas,” Rouhani posted.

The country’s top media organizations and newspapers devoted their covers to displaying the national sorrow, as well as noting the legacy Mirzakhani left behind.
Born in 1977, Mirzakhani was distinguished for her brilliance from a young age. She was the first Iranian woman in an international mathematics Olympiads team and won the contest two years in a row in 1994 and 1995 with a perfect score. She was an influential idol for the young women of her country ever since.
Her illness eventually led to breast cancer awareness, with health organizations pointing out the importance of early detection.
Tehran Metropolitan City Council announced that a street would be named after her.
Stanford University is planning a memorial service for Mirzakhani after students return to the California campus.

Frida Zeinali is a Reporter for Youth Journalism International. 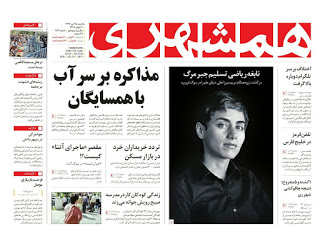 The Hamshahri newspaper’s headline: “The math genius surrendered to the algebra of death.”