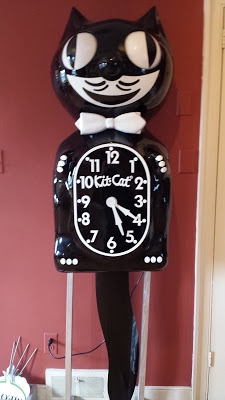 The 6-foot tall Kit Cat Clock is temporarily on display at the American Clock and Watch Museum in Bristol, Connnecticut. (Luke Ashworth/YJI)

BRISTOL, Connecticut, U.S.A.  – Many people, young and old, can recognize the familiar face of a classic Kit Kat clock. Since their creation in 1932, Kit Kat clocks have adorned kitchen walls for generations. That is to say, if they are small enough to fit on the wall. 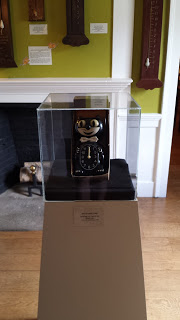 The museum’s own Kit Cat clock is showcased in a display that includes other novelty timepieces. (Luke Ashworth/YJI) 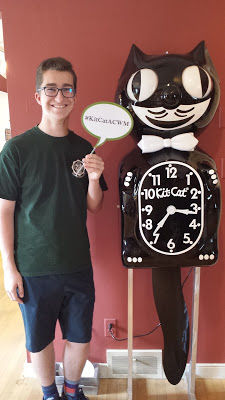 Museum executive director Patti Philippon spoke about this iconic piece of pop culture.
“The museum has had a Kit Kat clock from 1955 in our collection,” Philippon said. “A lot of people had them in their kitchens.”
After the clock’s 80th anniversary, Kit Kat clock’s created this purr-fect piece to showcase the legacy these clocks have had over the past seven decades. They also created a Kitty Kat clock of equal size, with pink fur and a pearl necklace.
Philippon explained the process she had to go through to temporarily acquire the clock.
The California Clock Co., which manufactures the iconic clock, advertised this large-scale timepiece to any store that sold it and wanted to host it in their showrooms. Philippon sent her application out immediately.
The museum received the clock on the last day of March, just before the regular museum season started.
The big Kit Cat Clock is at the American Clock and Watch Museum, 100 Maple St., Bristol, Conn., at least through the end of this week.  The museum has applied for an extension, asking the company to allow it to stay longer.
If you are nearby and interested in seeing this masterpiece of American pop culture,
stop by soon or call (860) 583-6070 to see if it is still on display.
Luke Ashworth is a Junior Reporter for Youth Journalism International.
***
It’s always the right time to show your support
for young writers by making a tax-deductible
donation to this nonprofit. Thank you!
HelpYJI.org