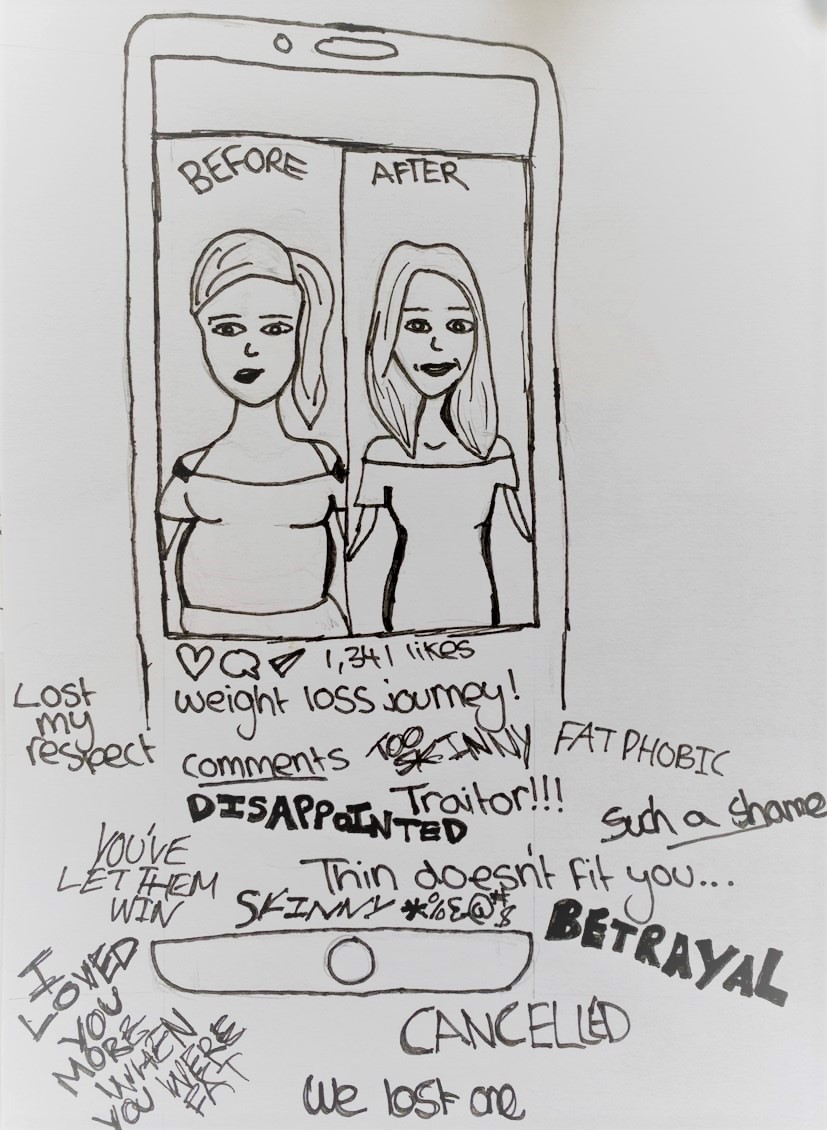 London, Ontario, CANADA – I am sure every one of us has felt insecure or had bad body image at some point in our lives. As a young woman, I understand the constant yearning to have a 5-foot, 9-inch, toned, tan body with a six-pack like the Victoria’s Secret models.

In the past, I’ve tracked my calories, exercised and obsessed over food, but I stopped before it got too much.

Shortly after, I discovered several body acceptance movements like body positivity, health at every size and fat positivity.

At first, it felt wonderful and freeing to see these confident, beautiful women who were unapologetically themselves.

I mean, that’s how it should be, right? We shouldn’t have to be self-conscious wearing a swimsuit and be able to love ourselves no matter what we look like.

This is the side of the different body image movements that I support and agree with.

But as I looked more into it, I discovered the darker sides of these social movements and the parallels between fat positive influencers and fitness models.

On social media, most big influencers are on either one extreme or the other. It’s either you work out six days a week eating kale salad, or you don’t give a crap about fitness and nutrition.

When you put them in a list, both groups focus too much on aesthetics. Even with the six-packs and muscles, having extremely low body fat for bodybuilding isn’t natural or very healthy.

On the other end of the spectrum, many people in these body-image related social movements have had a bad history with yo-yo dieting and diet culture. So if someone in the fat acceptance community tries losing weight, they accuse them of doing it for diet culture or looks, and deem it as “betrayal.”

When plus-sized model Tess Holiday posted videos of herself working out, there were always disclaimers stating that she is not trying to lose weight to avoid backlash. Since when has exercise or weight loss become the demon!?

Although all bodies can certainly be beautiful, not all bodies are healthy.

I agree with health at every size to the extent that you can’t only judge a person’s health by only looking at them. So, if someone is 20 pounds over or underweight, they could still be perfectly healthy. However, I draw the line in extreme cases like being morbidly obese or severely underweight.

People in the movement seem to forget that we still have a global obesity epidemic.

When an unhealthy individual has to justify an act that provides health, you know there’s a problem with the community.

Instead of being a movement that accepts everyone, fat acceptance has turned into a group of people forcing their ideology on others and cancelling anyone who disagrees.

A recent example of this would be the reaction to Adele’s weight loss. Several months ago, the Grammy Award-winning singer posted a birthday picture of herself on her Instagram, where you can see she lost a decent amount of weight.

It’s not a post of her showing off her new body in a tiny crop top, and she doesn’t even mention her weight loss.

Although it’s a seemingly innocent photo, she was bombarded with comments from the fat acceptance community skinny-shaming her.

There are thousands of comments telling her being skinny doesn’t suit her or that she “let them win!”

The same people supporting fat-acceptance who once looked up to Adele began body-shaming her because she looks different!

I think a large part of the reason is the fact that all of us want to see representation and have a role model who looks like us.

When Adele was larger, they could relate to her, but now she seems like every other skinny singer. I can somewhat understand them as I’m Asian and there’s not much Asian representation on screen.

But the main difference lies in the fact that I can’t decide to change my race. I can’t just wake up one day and choose not to be Chinese anymore.

Weight is, in a large part, within our control. As much as genetics and surroundings play a factor, the ultimate influence is still your actions.

Instead of thinking, “I am a fat person,” think, “I am a person with excess fat.”

Instead of looking at Adele as no longer relatable, think of using her as motivation to get healthy.

Ultimately, it’s not about diet culture, looks, or other people. It’s about living a long, happy, healthy life where your weight is not hindering meaningful experiences.

Matty Ennis is a Senior Illustrator with Youth Journalism International. He made the drawing.