LONDON, United Kingdom – All it took was a résumé and an email, and suddenly I’d secured a week-long work experience placement at the Houses of Parliament.  Many Members of Parliament offer this kind of opportunity to their student-age constituents and mine was no exception.

After filling out the extensive security forms – which involved assuring them that, no, I have never been a spy; nor have I tried to topple the government – I was ready and raring to go.
For me, the prospect of getting to work in Parliament was akin to the excitement Charlie must have felt knowing he’d soon see inside Willy Wonka’s chocolate factory.   The experience certainly lived up to my expectations.

How the British government works

For those of you unfamiliar with how the British government functions, I’ll give you a brief explanation.
As in the U.S., our parliament is made up of two chambers.
There is the House of Commons, which is elected democratically like the U.S. Congress.
The ‘upper chamber’ is the House of Lords, which is comprised of people who are chosen on the basis of their extensive experience in their field, and service to the country.
Unlike the Commons, the Lords is not democratically elected. It shares some similarities with the U.S. Senate: the Lords reviews and challenges the government’s work but, unlike the Senate, it cannot block or amend bills proposed by the Commons.
The Government is a cabinet of members of parliament (MPs) usually from the party or parties with the most votes led by the prime minister.
British politics is oppositional rather than consensual but MPs from the three main parties (Conservative, Labour, and Liberal Democrat) work together in select committees and All-Party Parliamentary groups to further causes in which they have a shared belief.

Fly on the wall

I have to admit, the first time I arrived in front of Portcullis House (the building in which most MPs have their offices), it took me a while to work up the courage to actually go inside.
The portcullis and crown, which is the symbol of the British government, gave the building an imposing air. I didn’t feel that I, as a mere 18-year-old college student, had the right to just walk into a building where so many important people worked.  Finally plucking up the courage, I went in and tried to look as if I belonged there.
I was met by a researcher from my MP’s office staff who took me to get my very own Parliamentary pass which was essentially an access-all-areas (well, almost) VIP pass which allowed me to walk freely around the complex.  Excitingly – but scarily –I was pretty much left to my own devices when it came to finding my way around.
He gave me his grand tour of the buildings, turned to me and said, “Got it? Good.”
Westminster Palace is a labyrinth: I had to contend with infinite courtyards, staircases, and secret passageways.
The place was strictly guarded by armed policemen and, at times, I felt sure one of them was going to suddenly arrest me for being somewhere I shouldn’t have been.
The best thing about my parliamentary pass was that it allowed me to be a fly on the wall and to see the everyday routines of Members of Parliament.
In the Portcullis House canteen, I listened avidly to the conversations at adjacent tables, conscious that most of these people had a hand in making decisions that affected all of the United Kingdom.
On my second day, Neil Parish, my MP, representing Tiverton and Honiton, invited me to have lunch with him on Parliament Terrace, an area strictly reserved for MPs and their friends.
It was a bit like being taken into the VIP zone by a famous singer, and I felt very privileged to be lunching with a bonafide politician in such a beautiful location.
The culmination of my fly-on-the-wall experience was witnessing the Government – the Prime Minister and his cabinet – in the House of Commons.  It was surreal and very cool to see the likes of Prime Minister David Cameron, First Secretary of State and Leader of the House of Commons William Hague, and Home Secretary Theresa May in the flesh.

If there’s one thing we Brits know how to do, it’s pomp and ceremony, and Westminster Palace, which is the complex where the House of Commons and the House of Lords are situated, is the perfect manifestation of this.
When I was taken on a grand tour of the buildings on my first day, I felt I could have been walking around Hogwarts.  I was stunned by the intricate beauty of the Victorian neo-Gothic architecture and décor.
Vaulted ceilings, gold paint, mosaics, and marble statues form the everyday environment of our MPs.  Even the functioning of government is studded with idiosyncratic ritual.
For example, the first time I watched a debate in the House of Commons I learned that everyone who entered had to bow to the Speaker of the House.
I was also among the crowd of fascinated, and slightly bemused, tourists who watched the Speaker’s procession through the central lobby. A hush descended as I watched Speaker John Bercow pass solemnly through the Hall preceded by the Sergeant at Arms who carried a large gold mace topped with a crown.
This relic of bygone ages, my guide informed me, is how Parliament begins its business every day.
While somewhat amused by the eccentricity of it all, I couldn’t help but feel a little proud of the historical dignity maintained by my country’s government.
Without a doubt, the place where I felt a sense of British history the most was in Westminster Hall.
Built in 1097 by the son of William the Conqueror, the Hall is a huge, high-ceilinged medieval construct, and I felt a perhaps geeky thrill when I learned how many famous people had stood there: names such as King Charles I, Sir Thomas More, Nelson Mandela and Aung San Suu Kyi were immortalised in bronze plaques on the floor.
Punch and Judy
One of the aspects of Parliament that I was apprehensive about prior to starting work there was seeing the infamous ‘Punch and Judy’ character of Commons debate.
Punch & Judy are a famous British puppet show involving knock-about physical comedy and constant insults.
Like most British people, I’d watched my fair share of “Prime Minister’s Questions,” which is a half hour period in which the Opposition, led by Ed Milliband, bombard Cameron with awkward questions. I’d shaken my head in despair at what looked like little more than a slanging match.  Was that really how our country was run?
Luckily, my work experience gave me a much better understanding and perspective of how the Government worked.  “Prime Minister’s Questions” was as raucous and farcical as I had expected: it’s the time of the week when politicians decide they’re not politicians anymore but, rather, comedians.
Yet I learned that, during the other 99 percent of the week, the wheels of government ran much more smoothly and with much more cooperation than PMQ’s suggested.
In Select Committees and debates on issues such as defense, government response to extremism in Africa, and cybercrime, I was heartened to see how well MPs from all parties worked together to reach a common solution.
Gone was the attention seeking and pointless bashing of the other side and in its place the actual, serious business of running the country.
All in all, my work experience in Parliament proved to be an exciting and informative week. Between all the various debates I attended, I got practice in writing and researching a briefing for an MP, taking meeting minutes, and writing summaries of the top news stories. Most MPs, I learned, are too busy to read the news online, and a fair few have no idea how to use Google.
For a consummate politics aficionado like myself, it was genuinely thrilling to see how my country was governed.  One day I hope to return: not as a wide-eyed work-experience student, but as an employee.
Emily Couch is a Reporter for Youth Journalism International.
***
Your tax-deductible contribution can help support this nonprofit at
www.HelpYJI.org

Pekin, Illinois, U.S.A. – Just a typical Saturday driving around town, but this time, we were on a... 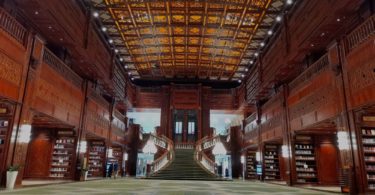 TEHRAN – The largest mall in Iran is Iran Mall in Chitgar, an area in the northwest part of Tehran...