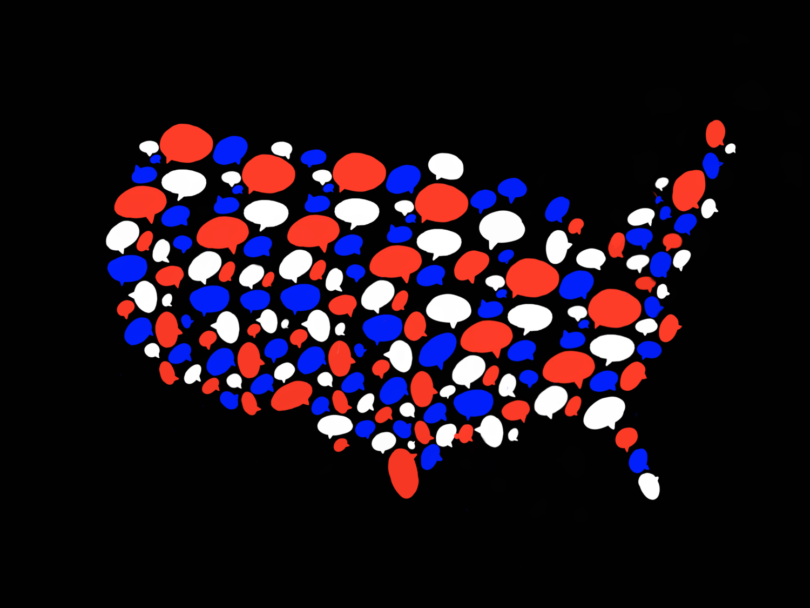 Houston, Texas, U.S.A. – I ask my questions, but he doesn’t seem to comprehend a word.

He mumbles some gibberish before I try again.

“What are you even trying to say?” I mutter.

An awkward pause until he offers more nonsense; we stare at one another and walk away.

What was this failed exchange? It was an attempt to strike up conversation on my first day of third grade – at an elementary school in Berlin, Germany, where I was spending the year with my family.

The problem was, I spoke next to no German. Now I’m a high school junior, and the daily spectacle of Americans from different political camps only talking past each other reminds me of nothing so much as my experience in the schoolyard that day. Simply put: We’re speaking different languages.

Phrasing the problem this way points to a potential starting point for improving our current political plight: learning other languages. Literally. At the root of the intense division plaguing the country are not so much policy disagreements as the inability of many to comprehend or even process opposing opinions.

Rectifying this divide seems like a near-impossible task, because any attempt to reach across the aisle is decried as biased or even downright malicious.

Foreign language learning offers a non-confrontational approach to this impasse. Though barely more controversial than learning math,language education presents a means to fundamentally alter the tenor of our political conversations.

The capacity to function in another language subtly works on our brain’s hardwiring, heightening something called our “tolerance of ambiguity,” or the ability to stay calm and logical when faced with an unknown. This happens constantly when learning a language; in conversation, we are bound to come across unfamiliar words and structures. To respond, we have to look to the person, and not their words, to try to understand what they are saying.

Not only that. Learning a language fosters our innate ability to understand other viewpoints and communicate with those that hold them.

The need to dive deeply into the nuances of a culture to learn its language – mastering and understanding the greetings, idioms, and style of communication that define it – makes people more resistant to stereotypes and heightens their respect for other cultures and societies, both abroad and here at home.

It should be disappointing, then, to learn that foreign languages are one of the most disregarded subjects in American public education. Just 25% of elementary schools have a foreign language program, according to a 2011 survey published in the Foreign Language Annals. My own Houston elementary school only set aside 20 or so minutes a week for such study.

Compare this to the European Union, in which 92% of primary students are learning a second language and expectations for second and third languages are clearly defined, according to a 2020 Pew Research Center report.

To give American students the opportunity to become multilingual, they have to have consistent, structured language classes. Half-measures like having 20 minutes a week aren’t an option, because that isn’t how learning a language works.

We can look to more successful countries for ideas on where to start. In the Netherlands, for example, foreign language is a mandatory subject in primary school, and for many a third language is introduced in secondary school.

Ninety-four percent of the Dutch population is bilingual, according to statistics released by the European Union. Ideally, these curricular reforms would encompass more than just foreign language education. Other subjects that focus on how we communicate and interact, such as writing and civics, have been similarly sidelined. They should be included in a broader shift in education.

Now, I know what you’re thinking: there isn’t any space left in the school day to add all of this language instruction, let alone language, writing, and civics. You’re right. Some sacrifices in math and sciences will have to be made.

But to say “sacrifices” is to simplify the trade-off. According to a 2010 report in The Modern Language Journal, the kind of mental processing that takes place while learning a language has been shown to improve performance in math and science.

Increasing foreign language education will complement, rather than detract from, other subjects, as well as provide cultural and social competence in a way that other subjects simply can’t.

The inauguration of a new president, along with his new, bilingual Secretary of Education, presents an opportunity to push for stronger language education. In the process, it would foster cultural understanding, encourage more civil public discourse, and enrich school subjects across the board.

And the benefits won’t be felt only here at home – just ask the next third grader trying to survive their first day in a foreign schoolyard.

Leo Bader is a Junior Reporter with Youth Journalism International. He wrote this commentary.

Sreehitha Gandluri is a Senior Reporter and Senior Illustrator with Youth Journalism International. She made the illustration.