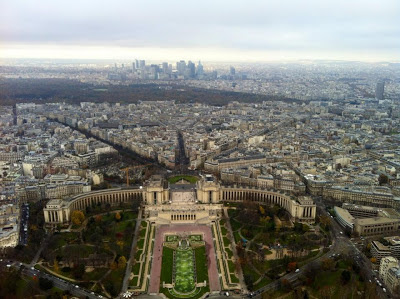 By Kaley Willis
Reporter
Youth Journalism International
PARIS, France –
When one thinks of France, they may think of men with curly mustaches and
berets, puffy poodles walking along the sides of the Eiffel Tower, and rude
American-hating Parisians parading around with baguettes.

During the past
Thanksgiving break, I found myself in the heart of France busting quite a few
of these myths.
Instead of these
stereotypical ideals that we have of Paris, I found a beautiful city filled
with passion, lights, genuinely nice people, and the best coffee you will ever
drink.

I was invited to
dance abroad in France as part of the American All-Stars national dance team.
The stress of packing, learning the language, and preparing myself to perform
in front of many people in a completely different country was almost debilitating;
little did I know, I was in for the best week of my life.

Upon landing at
Charles de Gaulle Airport in Paris after an eight-hour flight from the United
States, the tour group of dancers I traveled with and I were whisked off
immediately to the Arc de Triomphe, one of the more famous monuments in the
city.
Being
overwhelmed with the beauty of the city within the first hour of landing made
it all seem like a dream, a dream that I wouldn’t wake up from until the next
day when it hit me – I was in Paris, France, one of the most breathtaking
cities in the world.
When it finally
occurred to me what was happening, I ran into the French shower of our French
hotel and bathed in the French water with the fancy French soap. The
French-ness of it all was so exciting, I was ready to dive into the activities
planned for the day.
On the second
day of our tour, we went to Sacred Heart Basilica of Montmartre, a famous hill
that is the location of many hit films. Getting to walk the streets of Paris
like a local and see the sights was the best part of the trip to me.
Many people in
the Montmartre area roam the streets and perform for money. For many of them,
it is their only source of income. Sketch artists, cooks, dancers, and even
Michael Jackson impersonators show off their best abilities, hoping to bring a
smile to the faces of the tourists and locals and get a little cash.
After a long day
of roaming Montmartre and a long night of dance practice with the American
All-Stars, the next day was performance day at Disneyland Paris. Eighty
performers from sixth to 12th grade from all across the American South danced
in front of about 200 Parisians in the Disneyland Videopolis, the stadium
designed for park performances of The
Lion King.
It was an
amazing experience to project my passion for dance to new people, and all I
could think about onstage was, “I’m dancing in Paris, France … how did I
get so lucky?”
The rest of the
week was a continuation of breathtaking experiences, meeting new people, learning
my way around the city and making myself at home.
On Thanksgiving Day,
the last day of my trip, I took a river boat cruise on the Seine River and
traveled to the top floor of the gorgeous and famous Eiffel Tower. It was the
perfect ending to a perfect week in the city of lights and love.
Going to Paris
was the best decision of my life. Being granted the ability to escape my small
town of Sulphur, Louisiana to experience one of the most passionate and
wonderful cities in the world is an opportunity I’ll forever be grateful for.
If you ever have
the chance to travel to France, take it. You will not regret it.
Although you may
be disappointed when you don’t spot many French poodles and curly mustaches,
the rest of the city will more than make up for it.