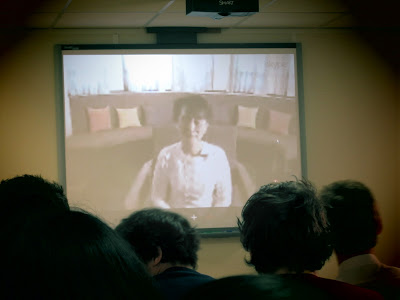 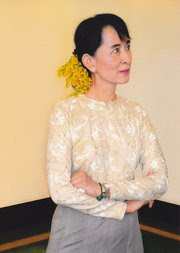 Suu Kyi, the head of Burma’s National League for Democracy and the winner of the 1991 Nobel Peace Prize, had a videoconference Tuesday with about 120 students, who asked questions about her political and economic priorities.

Suu Kyi emphasized the need to “open up” the country in all senses of the term – to establish a transparent democracy, a more liberal economy and to allow people to enter and exit the country freely.
When a student asked her what the Burmese people’s greatest desire was, she replied without hesitation, “Freedom from poverty.”
Even before her party won the 1990 general election – a victory the military government refused to recognize – Suu Kyi has been the rallying point of the Burmese movement for democracy.
After many years keeping Suu Kyi under house arrest, the regime finally released her in 2010. She is now a candidate in the parliamentary elections set for April 1, along with other members of the National League for Democracy party.
Today, the government of former General Thein Sein, who is now president in Burma, is freeing political prisoners and undertaking some liberal reforms – all of which may be early signs of a historic transition to democracy.
Though Burma is a country rich in natural resources, its population is among the poorest in the world.
Other students asked about what kind of role the Burmese Army would take once the democratic transition had been made. To this, Suu Kyi replied that it would take on the role of the army in any democracy.

“The United States has the most powerful army in the world, and it is still a democracy,” she added.
Several students asked Daw Suu, which is an honorific name for Suu Kyi, about the role of their respective countries in accelerating or decelerating this transition.
While she remained diplomatic, suggesting that the Burmese people would be very grateful for any help from abroad, Burma’s foreign relations show the power of the international community.
India and China, Burma’s immediate neighbors and nations with growing economies, have not imposed any trade sanctions on Burma, but sanctions by the European Union and the United States have proven effective in urging the current reform process.
Students knew of Suu Kyi’s relentless dedication to the cause of democracy and her constant presence beside her people, and something of the great personal cost she’s paid.
What the Skype conference showed was Suu Kyi holding her own humility right alongside the hopes of all her countrymen.
With some participants inspired to the verge of tears, this was a day the students of SciencesPo Le Havre will remember forever.
Sara Chatterjee is a Junior Reporter for Youth Journalism International. Wen Jian is a Photographer for Youth Journalism International.