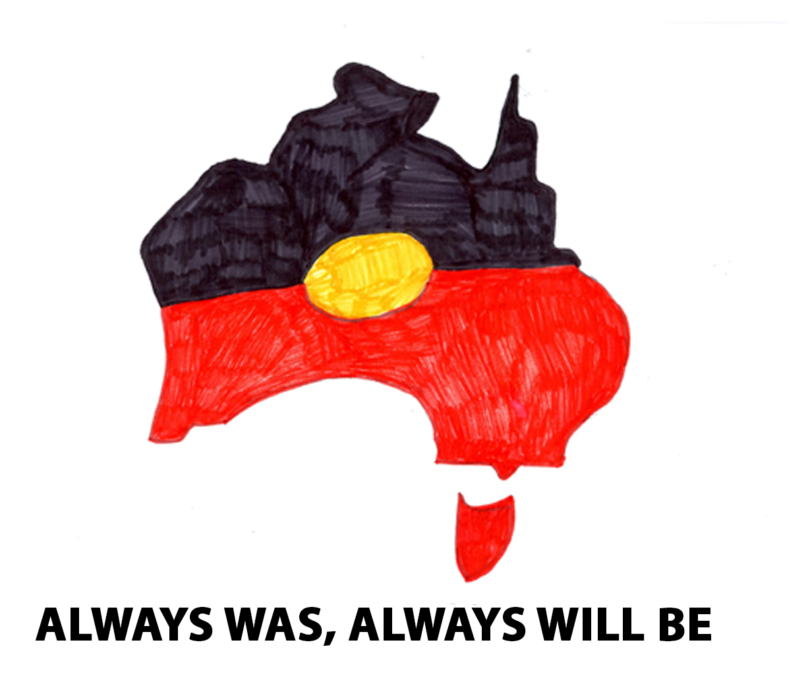 Australia covered with the Aboriginal flag, which symbolizes how this land was, and always will be, Aboriginal land and that sovereignty was never ceded. (Alyce Collett/YJI)

Melbourne, AUSTRALIA – The national day of the land Down Under, Australia Day, commemorates the day in 1788 when the first fleet of English colonizers set foot in Botany Bay, which is now part of Sydney.

Stereotypical ways to celebrate this January 26 holiday involve barbecues and beers with friends and family, and citizenship ceremonies.

Except not for me. To me, it’s just another day. I care so little about Australia Day that I often forget the actual date of Australia Day.

Don’t get me wrong. There are lots of things that are great about this country. We have some of the most amazing singers and bands to have ever released music: Midnight Oil, AC/DC, Crowded House – all Australians.

We invented arguably the greatest sport in the world – Australian Rules Football. Seriously, I don’t know what I’d do without Aussie Rules. It is a huge part of my life.

Despite all these positives, there are a lot of things wrong with this country, and one of them is the date of our National Day.

January 26th is not a positive day for the Indigenous people of Australia and is often referred to as a day of mourning.

Before colonizers arrived in 1788, people native to this land lived undisturbed for thousands of years. But the arrival of the First Fleet began an attempted genocide of the Indigenous people.

It is unclear how many Indigenous people were killed in those massacres, but I believe it was tens of thousands.

That was just the start. Over the next roughly 250 years, the Indigenous people in Australia were subjected to racist policies at the hands of the federal government of the day.

The Stolen Generation was a policy that was in existence from 1910 to 1970 and saw Indigenous children taken from their families and adopted by white families. The policy was based on the assumption that the lives of the Indigenous people could somehow be improved if they became a part of white society.

According to the non-profit Australians Together, the policy also proposed that “Aboriginal and Torres Strait Islander people should be allowed to “die out” through a process of natural elimination, or, where possible, assimilated into the white community.”

With all this in mind, it won’t surprise you to know that Australia Day is controversial for a lot of people here.

Many people do not see Australia Day as a day of celebration, but rather as a day of mourning. I am one of them. I am not Indigenous, nor claim to speak on behalf of Indigenous people, but I hope that I can be an ally of theirs.

I was not taught Indigenous history at school, but as I have grown older, I have come to realize how badly the Indigenous people of this country have been treated and continue to be treated.

I can tell you all about what happened in the Russian Revolution of 1917 but up until the other day, I couldn’t tell you anything about the Convincing Ground Massacre of 1833-1834 in Southwest Victoria.

This is a serious problem with our school curriculum and must be fixed.

I don’t have much hope of things improving.

“It’s all about acknowledging how far we’ve come,” said Prime Minister Scott Morrison at a recent press conference about Australia Day. “When those 12 ships turned up in Sydney, all those years ago, it wasn’t a particularly flash day for the people on those vessels either.” This is the same prime minister who gets angry when Cricket Australia dropped the use of Australia Day in promotional material and regional governments cancelling Australia Day services or refusing to hold citizenship ceremonies on Australia Day.

I am not alone in the way I feel about Australia Day. A growing number of people are against having our national day on its current date.

Although the majority still do want the national day on January 26, that percentage of people is decreasing.

According to polling conducted by the Institute of Public Affairs at the end of last year, only 69% of those surveyed agreed or strongly agreed that Australia Day should be celebrated on January 26th, compared to 71% the year before and 75% the year before that.

While there were only about 1,000 people surveyed, it is still a good sign that opinions are changing among my fellow Australians. What gives me even more hope is that among those surveyed, younger people tended to be more against Australia Day being on the 26th than older people.

Although I have no faith that our political leaders will do anything about changing the date anytime soon, I do have hope that it will change one day.