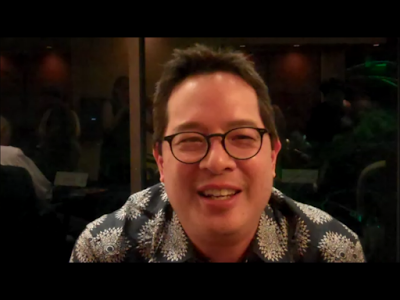 Journalist Jeff Chang, author of "Can't Stop Won't Stop" spoke at the Mayborn Literary Nonfiction Conference in Grapevine, Texas this month. (Mughda Gurram/YJI)
GRAPEVINE, Texas, U.S.A. –   One of the major issues facing journalists today is reporting on important matters, such as race, while respecting the
sensitivity of the subject.

Speaking before fellow journalists, author Jeff Chang talked about how reporters deal with race.
Chang, who wrote Can’t Stop Won’t Stop, a non-fiction book about the early years of the hip-hop generation, was a featured speaker at the Mayborn Literary Nonfiction Conference in Grapevine recently.

Chang discussed his thoughts on writing about a different race, and why it’s so important that journalist take the time to write about it.
Riots people hear about it in the news, whether it’s about Rodney King, Michael Brown or Eric Garner, are happening for a reason, Chang said.
The uprisings, he said, are “not a mistake. It’s because we don’t get to the conversations we need to have.”
He attributed the lack of conversation to “this sort of racial amnesia that Americans have regarding these kind of issues.”
Chang emphasized the importance of bringing awareness to racial issues and the tension that rises because of them. It’s the only way real progress can take place, he said.
He encouraged journalists to report on the issues of racial tension, even giving them a suggestion as to where to start.
“Re-segregation, I think, is the issue of the day,” he said.
Chang also stressed that when writing about sensitive topics such as race, it’s importance to be fair to the subject, and readers, by telling the story accurately and objectively.
Part of writing a story about someone, he said, is forming a relationship with them. Chang says it’s a journalist’s job to respect this bond, while also giving an accurate
representation to readers.
“It’s about being accountable and remaining accountable.”

Mughda Gurram is a Senior Reporter for Youth Journalism International.

***
Your tax-deductible contribution can help support
Mugdha Gurram and other students at this nonprofit at
www.HelpYJI.org