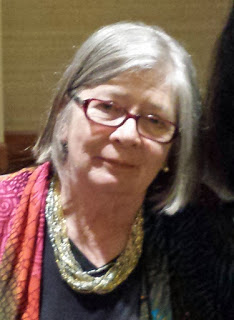 Ehrenreich, a keynote speaker at the Mayborn Literary Nonfiction Conference, said she just happened to realize that her passion for reporting on social issues she cared about was what journalism was all about.
But – citing low pay and other obstacles – Ehrenreich said it would be nearly impossible for her to start a career in journalism today and accomplish what she has.

“That’s what’s so heartbreaking,” she said.
Ehrenreich voiced her opinion about low-paying jobs and unpaid internships for reporters that might provide some experience but not a way to make a living.
“Who can live on an unpaid, or $10-15 an hour internship?” Ehrenreich asked.
There are lots of available platforms for publishing, she said, but said many don’t pay.
“The idea of paying writers is not in their business plan,” Ehrenreich said. “I’m so amazed when I meet an employed journalist.”
Ehrenreich – who brought the plight of impoverished minimum wage earner to light with her 2001 investigative book Nickel and Dimed: On (Not) Getting By in America –criticized the
Texas minimum wage, which is $7.25 an hour.
She spoke about the hurdles people with low-paying jobs face on a daily basis.
Beyond that, poor or working class people are often viewed as unintelligent or even illiterate.
“Prejudice still exists that people who are poor or working class are unable to express themselves,” she said.
Because of this system built against the working class, Ehrenreich says that “those with the most to say are most often ruled out.”
The author also discussed the obstacles faced by working class people, many of whom are unable to attain a degree.
“Some of the most brilliant people didn’t go to college and are doing successful work,” she said.
Referencing the conference theme, “The Great Divide” Ehrenreich urged the journalists to raise awareness of the prejudices facing the working class and poor in America. It’s something she’s been addressing since 1985, she said.
“Everybody has to be looking at this great divide, which has gotten so much greater.”
Mugdha Gurram and Sydney Hallett are Reporters for Youth Journalism International.