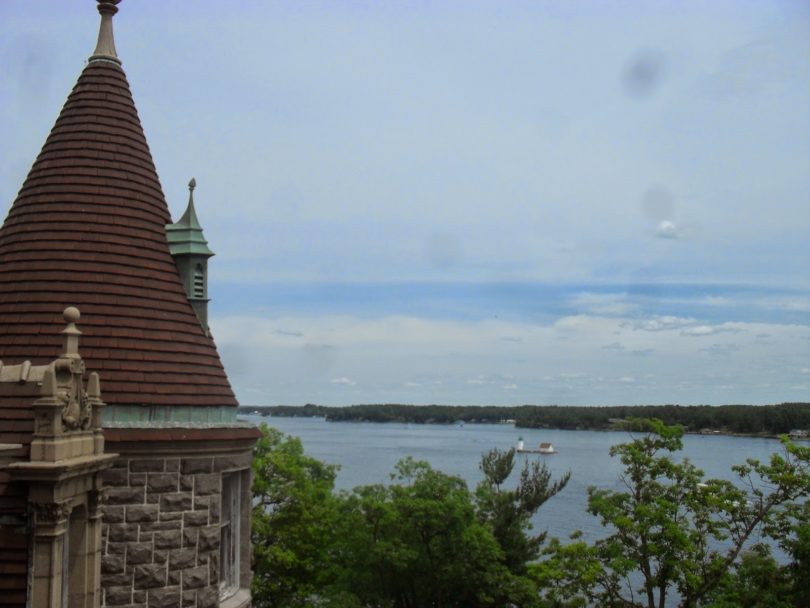 By
Mugdha Gurram and Yelena Samofalova
Reporters
YouthJournalism International
THOUSAND
ISLANDS, New York, U.S.A. – On the border between Canada and the United States,
the St. Lawrence River is filled with tons of small islands, some with vacation
homes on them and others just covered in trees.

One of
the biggest attractions in the Thousand Islands area is the vacation home and nearby
yacht house of early-1900s millionaire George Boldt.

Boldt’s
yacht house is on Wellesley Island and contains a small portion of the
estimated 60 boats he owned in his lifetime, including some of his racing boats
and others he just rode out on the lake. Nearby on Heart Island, which visitors
can get to by ferry, stands the vacation home he had begun to build for himself
and his family.

The
Boldt Castle consists of four floors of elaborately decorated rooms, small rooms
covered in graffiti, and even a secret passage down in the cellar, which – as some
of us figured out the hard way – is not for the weak of heart.

In many
of the rooms, the walls are completely covered with the signatures of guests
over the years, despite the warning of criminal prosecution for property
defacement. People left dates – some going back to 1970 – along with their
names.

Throughout
the house, pieces such as plaster, imported marble, and construction tools from
the original building are on display.
There’s
a stark contrast between the first two floors and the ones above them. When we
walked in, we saw a fancy billiard room and reception area, average rooms for a
mansion like this.
At the
center of the first floor there’s a great staircase leading to the second
floor, where a balcony overlooks the marble floors and various gold and
white-themed decorations. Looking up, we could see the elaborate, dome-shaped,
stained glass ceiling. On the second floor, the circular hallway leads off into
the grand rooms where Boldt and his family would have stayed.

However,
on the next few floors, visitors see only deteriorating walls of broken brick,
wooden floors and small, vandalized rooms. A saving feature of this part of the
house is a stone balcony on the third floor overlooking the water and the rest
of the island.

An
interesting, yet uncompleted part of the house is the basement. Although it was
above ground, with grand windows all around the room, it was cool and somewhat
dark.

This
floor of the castle is comprised of a large stone room with a small pool in the
corner. Leading away from the room is a long winding hallway with a dirt floor,
almost like a secret passage. Of course, we followed the path from the creepy
cellar back to the beautiful grounds outside.

The
castle is an incomplete remnant of the summer home that Boldt, a wealthy hotel
proprietor, had hoped to give to his wife on Valentine’s Day in 1904. There are
hearts built into the architecture all over the house.
But
Louise Boldt died mysteriously that January – just a month before she would
have received her Valentine’s Day gift.
George Boldt ordered all halted. He never went back to the island.
The
house was left to deteriorate for more than 70 years.
In
1977, the Thousand Islands Bridge Authority began restoring the castle. So far,
$35 million has been spent. The work began as an effort to bring the castle
back to the condition it was in when Louise Boldt died, but the restoration
process has far surpassed that and is moving toward finishing many of the
original grand plans.
Today,
tourists enjoy what the Boldt family, despite its vast wealth, never could.