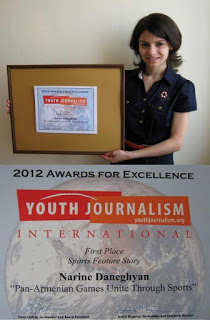 Youth Journalism
International’s Excellence in Journalism contest is now in its fourth year, and
the deadline is fast approaching.
Now seems a good time to
remind everyone what makes YJI’s contest different.
The other aspect of the YJI
contest that sets it apart is that unlike any other journalism contest we’ve
known or heard of, entry fees can be waived for individuals (not schools) in
cases of hardship.
We know there are young
people around the world who are doing great journalism but may not be able to
afford even the modest entry fee that accompanies this contest.
The fee waiver has been
offered since the contest began, and every year, there are young people who
explain why they can’t pay, and they’re allowed to enter anyway. We don’t want
to exclude anyone from participating because of a small fee.
However, the contest is
costly and the fees are important, so we appreciate it when the fees are paid. Even more, we’re grateful to
those who add a little to their own fee to help cover those who can’t pay.
Last year, so many people
were asking for fee waivers that we nearly abolished the practice – until we
got a generous donation from the EPS Junior Academy in Seoul, South Korea that
helped immensely.
So right now, as we’re
preparing for an onslaught of entries, we’d like to pause and thank Mr. Jeffery
Ahn, director of the EPS Junior Academy, for thinking beyond his own students’
fees and making it possible for so many others to participate.
We
hope some of the others who enter the contest will be able to follow Mr. Ahn’s kind
example and add a little extra for those who can’t pay. Maybe even some interested
readers who aren’t entering anything at all might consider this kind of
contribution.

Every gift of any size helps
and is gratefully put to use as the cost of prizes and postage is considerable.
Contributions and fees can be paid by check or credit card using PayPal and
details can be found here.

The other remarkable thing about YJI’s contest is that it’s worldwide. As long as the text is in English and the person enterng is not a professional journalist – and was age 19 or under at the time of publication – the work of any young person, anywhere, is eligible.
We know of no other journalism contest that is open to young people all around the globe.

Winners of the top awards –
Student Journalist of the Year, Journalism Educator of the Year, Courage in
Journalism and specially-named awards for the best news story and best
commentary – receive beautiful crystal trophies.

Winners in all categories
receive a personalized, custom-made certificate. Contest results will be
announced in May and awards mailed to winners.

Entries are due Friday, Feb. 8, so don’t waste a minute. Get yours in today! Here’s the link for the rules and other contest information.