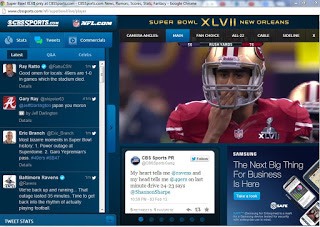 WEST HARTFORD, Conn., U.S.A. — The Super Bowl is available online, and I for one am grateful for it. For those of us without functioning televisions, CBS Sports’ online app allows viewers to watch the regular version of the game being broadcast on TV, but also enables people to switch between different camera angles.

There’s a running stream of tweets about the game on the left side, and a drop-down menu that provides up-to-the-minute stats.
There is some sort of glitch in the advertising — I’ve seen the same ad seven or eight times already –and, to be sure, watching on your laptop isn’t the same as watching on an 80” flatscreen.
Ultimately, though, it’s amazing. CBS Sports has really raised the bar this year. Other networks should take note.