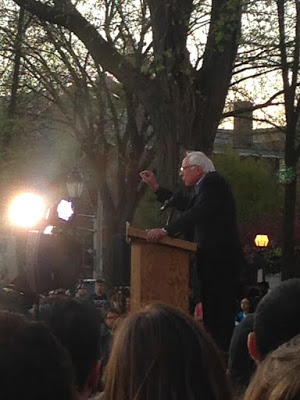 Addressing an enthusiastic crowd of thousands on the New Haven Green, Sanders spoke on a variety of issues ranging from mental health to immigration. As he stood not far from the main campus of Yale University, he emphasized in particular the changes that needed to be made to the education system. 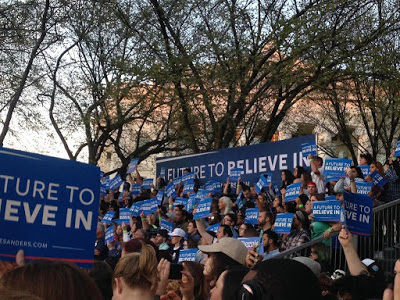 A throng of sign-waving supporters filled a set of bleachers behind the speaker’s platform. (Mugdha Gurram/YJI)

While New Haven is home to Yale, one of the world’s leading educational institutions, Sanders said the city is also home to many students who didn’t dare to dream of a college career. This situation, he said, is one that mirrors America as a whole.
“Education and learning is inherent in who we are as human beings,” said Sanders. “Why are we punishing millions of people for getting an education?”
He mentioned many such issues in which he pushed for change, and implored his voters to push for such change as well.
“Real change never takes place from the top on down. It always takes place from the bottom on up,” said Sanders. “Don’t believe what the media or anyone else tells you. We can change the status quo.” 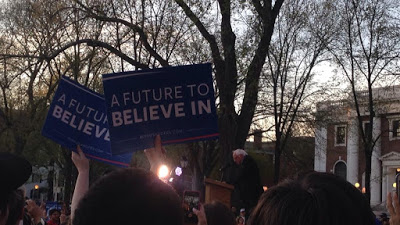 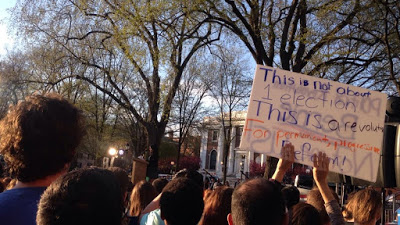 Though homemade signs were prohibited at the rally, some still made it into the event. (Mugdha Gurram/YJI)

***
Your tax-deductible contribution helps students
supported by this nonprofit. Thank you.
HelpYJI.org